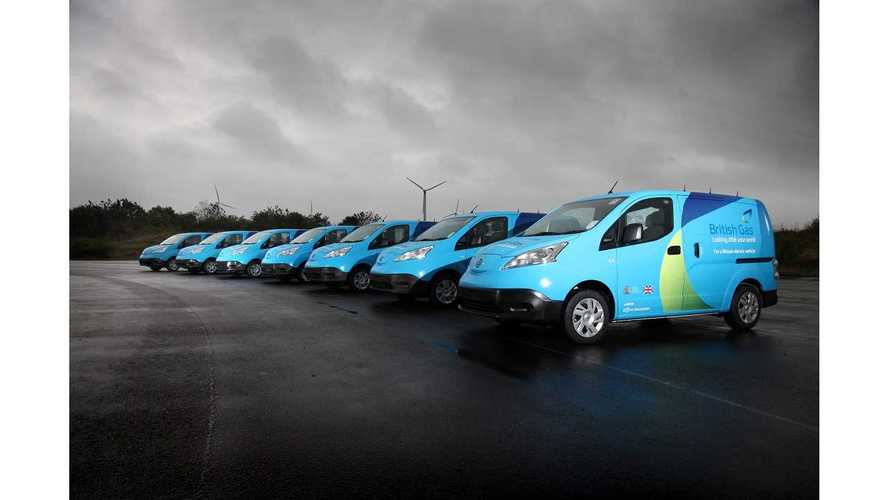 As further proof that Nissan's much-anticipated, all electric e-NV200 van is indeed coming soon, the commercial testing of the vehicle has moved from a random one or two EVs placed globally (here, here and here) to 28 in one location.

This fleet of electric vans have all be shipped to British Gas, which surprisingly enough - is in the United Kingdom.

The Nissan e-NV200s will be in operation at least 6 months, gauging their use in a fleet environment over a winter season.

As the UK's largest ever electric commercial vehicle evaluation to date, the winter test underlines the importance of the relationship between Nissan and British Gas to be involved in this important phase of zero-emission vehicle testing.

The pilot of the Nissan e-NV200s is being conducted nationwide from November 2013 until April 2014 to assess how the vans perform in winter conditions during typical British Gas home services daily usage patterns.

And while the Nissan e-NV200 has only officially been announced for Japan release in "fiscal year 2014" and the rest of the world thereafter (including the US), it now appears that the UK will also be receiving the first publically available e-NV200s in 2014 as well.

Jim Wright, Nissan GB managing director, said: "We're proud to be providing the vehicles and services for the UK's largest ever electric commercial vehicle pilot in conjunction with our strategic partners.

Piloting such a large number of vans with British Gas in advance of the e-NV200 going on sale in 2014, underlines the closeness of our relationship and marks the final stages of the vehicle's development."

Production of the Nissan e-NV200 gets underway "mid-2014" in Barcelona, Spain.  The electric van will be available in both commercial and passenger applications, with an expected range of about 70 (EPA) miles.