Top 10 Cities For Electric Vehicles As Seen By ChargePoint Released 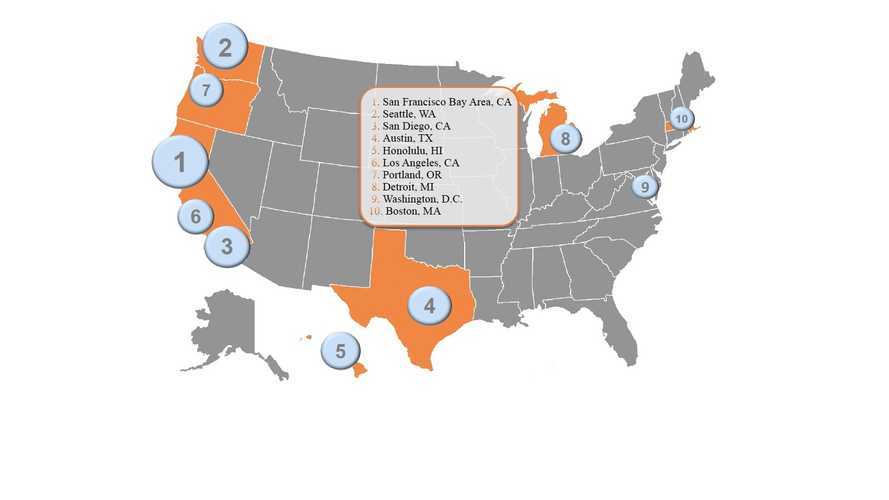 A recent popular trend by automakers is highlighting the regions and cities in America that have accepted their plug-in vehicles with open arms.  Now ChargePoint weighs in with an infographic of their own.

Here Is Nissan's "Top 10" Cities For September (click to enlarge)

How did Chargepoint compile the rankings?  By combining EV sales with their own charge station roll-out demographics.

“We are witnessing historic growth in the electric vehicle market,” said Pasquale Romano, CEO of ChargePoint. “The cities and the businesses in those communities that invest in EV infrastructure, not surprisingly, also see the largest sales in electric vehicles. We are no longer debating if EVs have a future, but instead are witnessing cities across America compete to be the most EV friendly.”

A lot of the places on  the list are familiar ones - with two exceptions: Detroit and Boston.

Having never heard of either of these places being particularly receptive of electric vehicle adoption, we must assume that ChargePoint either has a lot of stations in the area, has some kind of special intel...or has some special designs on the area for the future.

While Los Angeles has the most number of EV drivers (over 17,000), based on population differences, San Francisco Bay Area with nearly 15,000 EV drivers led the nation, followed by Honolulu and Seattle. When it comes to EV charging stations, San Francisco Bay Area also led the way both cumulatively and based on population with nearly 4,000 stations, and equating for population, Austin and Seattle followed.