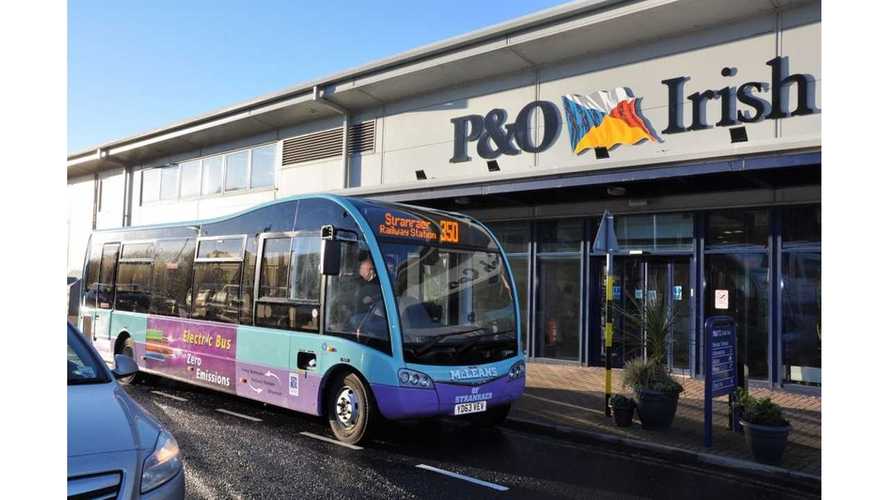 “I am delighted to launch this innovative new bus service which will connect the ferry terminals at Cairnryan with Stranraer’s railway station and form a vital link in Scotland’s transport network."

"This is the first all-electric bus to be purchased through the Scottish Green Bus Fund and I recently announced a further round of Green Bus funding in 2013/14 with a budget of around £2 million which reaffirms our support and commitment to the bus industry and is a good example of Scottish Government working in partnership with the industry to promote greener travel."

"The Scottish Government will continue to encourage organisations, businesses and individuals to make the switch to electric vehicles to help us achieve the 2050 vision of freeing Scotland’s towns cities and communities from the damaging effects of petrol and diesel fuelled vehicles, as set out in the recently launched Switched On Scotland: A Roadmap to Widespread Adoption of Plug-in Vehicles.”

The bus links the ferry ports at Cairnryan to the railway station in Stranraer and it runs six days a week.

“The Regional Transport Partnership and Scottish Government investment in this service will ensure that there is significantly improved connectivity between Stranraer, its station, its ferry ports, and Northern Ireland and the Republic. The new connection will hopefully encourage foot passengers back to Stranraer which has been a problem for the town since ferry operations moved to Cairnryan”.

Optare stated that thanks to its latest projects in Ayr, Nottingham and York, the number of its electric buses in service in the UK is now approaching 50. So, maybe the UK is behind with regards to passenger EVs, but its EV bus fleet is largest in Europe.

“In addition to the known environmental benefits, this is a large enough number from which to obtain a clear picture of the operating and commercial benefits of free-running electric buses. The evidence is steadily building that electric vehicles, the introduction of which Optare has pioneered in the UK, have a place in the public transport system when used selectively."

"The vehicles are proving reliable, resulting in lower maintenance costs, and running costs are significantly lower than an equivalent diesel engine bus. The savings in operating costs that this results in can deliver a payback on the additional cost of an EV that is well within the lifetime of the vehicle. Along with technological developments that have increased the range that an EV can achieve, this makes them commercially viable across a wider spread of operations.”