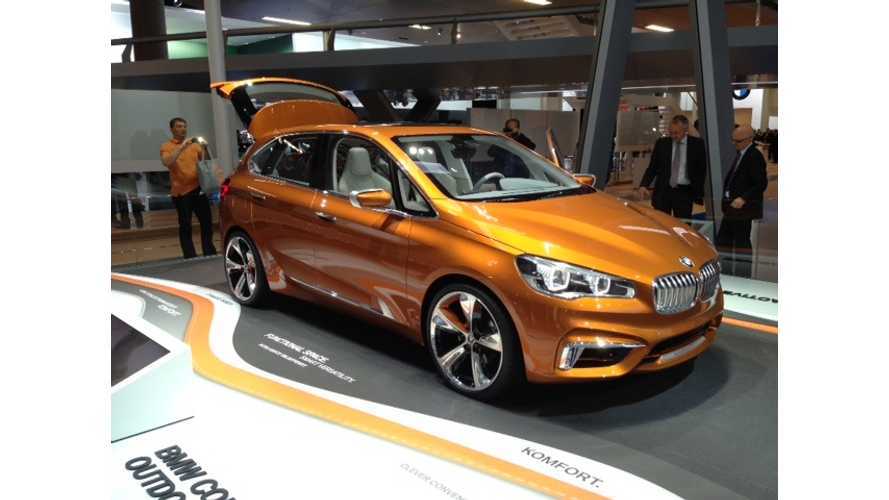 From the floor of the 2013 Frankfurt Motor Show, we brought you live images of the BMW Concept Active Tourer.

"...a version of this vehicle (called the 1-Series GT) will be production-bound soon, perhaps as early as 2014."

Some had their doubts, but today BMW is confirming what we stated.

"BMW's first front-wheel-drive crossover, the Active Tourer, will go on sale in the United States in early 2015."

Ian Robertson, BMW AG's board member for sales and marketing, is the source of this latest info, so let's now say that the Active Tourer is definitively headed for production and will launch in the US.

But none of the production versions will be called the Active Tourer.

When it enters production, expect the Active Tourer to become the 1-Series GT.

The plug-in version (which we hope launches immediately and not several years after the 1-Series GT lands in the US) will likely feature a a 1.5-liter three-cylinder turbocharged (borrowed from the BMW i8) engine with a “high-performance” electric motor (likely borrowed from the BMW i3) and a lithium-ion battery.
This setup will crank out somewhere in the neighborhood of 190 hp, which will propel the production vehicle from 0 to 60 mph in less than 8 seconds.

Top speed will be approximately 125 mph.

The powertrain eventually found in the plug-in hybrid version of the 1-Series GT will almost surely be identical to the one that powers the upcoming Mini Cooper plug-in hybrid.

You see, BMW is being wise by spreading its production electric components out over several of its offering.  So, expect to see what's found in the i3 and i8 trickle through BMW's entire future plug-in lineup.  It makes perfect sense.