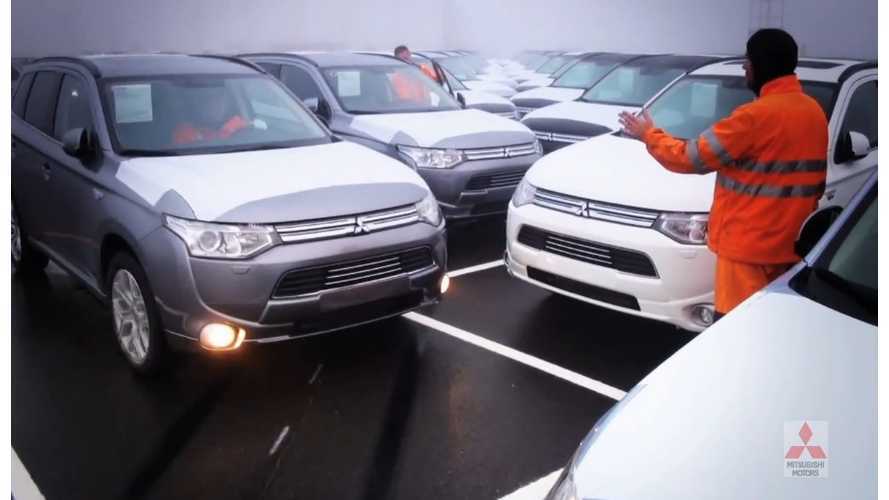 As of this week, the Mitsubishi Outlander PHEV is now officially on sale in Europe.

Mitsubishi says the first cars are hitting the Netherlands now - via the Zeebrugge port from their plant in Japan (video of landing below).   European production of the plug-in Outlander began in early August, with the Netherlands is the "designated launch country in Europe."

According to the Japanese company, Europe will be the largest market for the plug-in extended range Outlander.

Since pre-orders started last December, more than 10,000 "signed orders" have been received.  Mitsubishi says the roll-out will be a gradual one, as they continue to struggle to match capacity with demand.

Mitsubishi says the Eurozone Outlander PHEV is basically the same as the one on sale now in Japan, and only differs "in complying with mandatory EU regulations and with a chassis fine-tuned to better suit European driving style."

Euro specs (NEDC) on the Outlander PHEV were listed as follows by the company:

However, what makes the Outlander PHEV really special is that it comes in a 4WD utility package, with a max cargo volume of 463 l (VDA method – w/rear passengers) and can tow a whopping 1,500 kg (3,300 lbs).  Try that with your Chevrolet Volt or Tesla Model S!

Of interest:   Due to very high demand and a extended production shutdown caused by earlier difficulties with battery production has delayed the Outlander PHEV in the United States until early 2015.