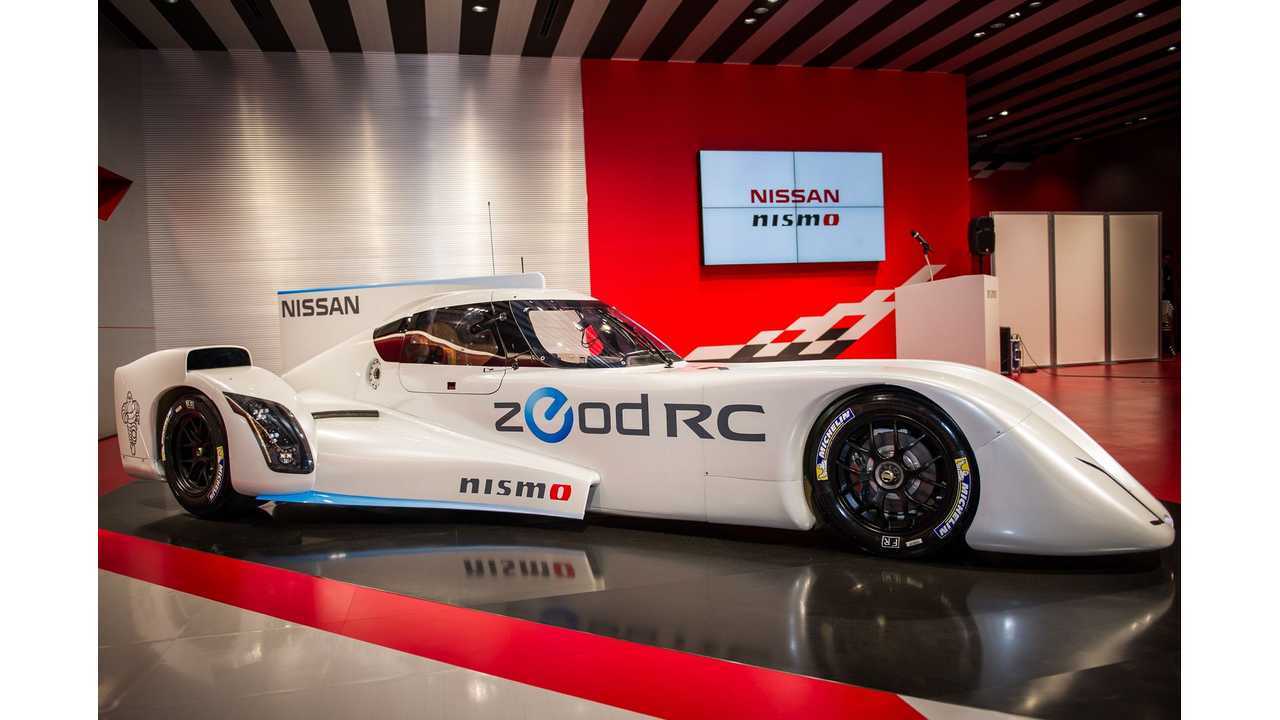 According to Nissan, the ZEOD RC will go one lap at Le Mans at racing speed ( 185 mph) in EV mode, but essentially it's a plug-in hybrid with an ICE engine and six-speed racing gearbox.

Here are videos from Fuji Speedway and the unveiling event in Yokohama:

Bowlby, who is leading the car's development, described the evolution of the ZEOD since February as a "moon race," bringing the best of Nissan's innovative design and engineering to help change the face of zero-emission racing. He spoke with the Nissan Global Media Center about the ZEOD project and its landing next year at Le Mans.

Global Media Center: How has Nissan ZEOD evolved over the last seven months and what parameters have been key in its development?

Ben Bowlby: Once we decided that Nissan would go back to Le Mans in "Garage 56" to showcase the zero emission on demand technology, that's when the moon race began.

Basically, we had a very, very short time to get the car together, a ground-up design, a completely blank screen from a computer standpoint, and first of all looking at what the parameters for the electric ride would be. This is the chance, this is what ZEOD is really all about – it's the electric drive technology that gets us one lap at Le Mans at the racing speed. It's never been done before and will be a world record if we get it. It's not been done before because it's really difficult, so that set the whole tone for the project. We had to find low-drag solutions, low-volume resistance, packaging and lightweight constraints to make it possible to showcase the electric technology.

So really, because the electric challenge is what we're focused on, everything else had to fit in around it.

Media Center: Energy transfer to the battery from braking is vital to this process. Walk us through what's involved.

Bowlby: First of all, the cockpit is interesting as much as this is 2014 regulation for a cockpit in LMP1.  It's the parameter from the size standpoint, and also from the crash safety standpoint. This is full 2014 spec.

Inside the office, the driver has the tricky job of managing the car's controls. In fact, we're going to make it as easy as we can for him to seamlessly be able to transfer between the Internal Combustion Engine (ICE) – gasoline-powered – and the electric drive. In fact, he will basically have a button that will be basically at his command – on demand. He will be able to change to the electric drive; he must only do that if he wants to complete a full lap, after the battery has been recharged during braking events, so the electric motors that power the car forward under electric drive are also used as the regeneration motors for braking events.

So when the driver is braking, we take as much possible as we can from each of the wheels at the rear of the car and store that electrical energy in the battery for use once the battery is full to make the next lap.

Media Center: Race conditions present "Yellow Flags," bad weather or other circumstances. How would that affect the brake-generated power?

Bowlby: We have got to monitor the state of charge of the battery and what is available to the driver at any time. We will manage that energy in the most-efficient way possible throughout the course of the race, and this is going to be something that we have time to learn about – what are the characteristics of the car? We'll do our simulation work, we'll have the drivers put into our GT Academy simulators, and then give them the ZEOD to drive and say, "What is the best strategy for achieving this efficient use of the electric power?"

Also, using the electric motors to generate a lot of the braking force requires a very state-of-the-art technology – brake blending – because we can't have only electric braking on the rear; there's too much energy for us to be able to absorb it all. We have to blend some mechanical braking and some electrical braking, and the driver shouldn't know that it's going on. His job is just to brake as late as he can and make lap time. That's what he does, and we have to do as much as possible for him.

Media Center: After the learning so far, what changes may be in store ahead for ZEOD RC before Le Mans?

Bowlby: It's been a seven-month design and manufacturing process. Now the learning really starts. We made assumptions about what was possible with the most-educated materials we could, but they are still assumptions. So, the first job is to make the thing run. We've had a little bit of difficulty, as we had to get it running in a way that is safe, that is fast enough and reliable enough. We need to understand exactly which parts of our assumptions were good, and which that there are still some challenges to overcome with some countermeasures.

So, countermeasures are coming for getting us running, and then we're going to learn about the fine detail and presumably we're going to develop the components to get the performance we need in time for Le Mans.

Media Center: This is not just about the track, but these technologies will be applicable in the future to other vehicles – electric or otherwise?

Bowlby: Absolutely. That is what is so interesting about this kind of racing – this experimental class. We're putting cutting-edge technology in this vehicle for the purpose of learning, and that learning is something we can carry out to future projects."