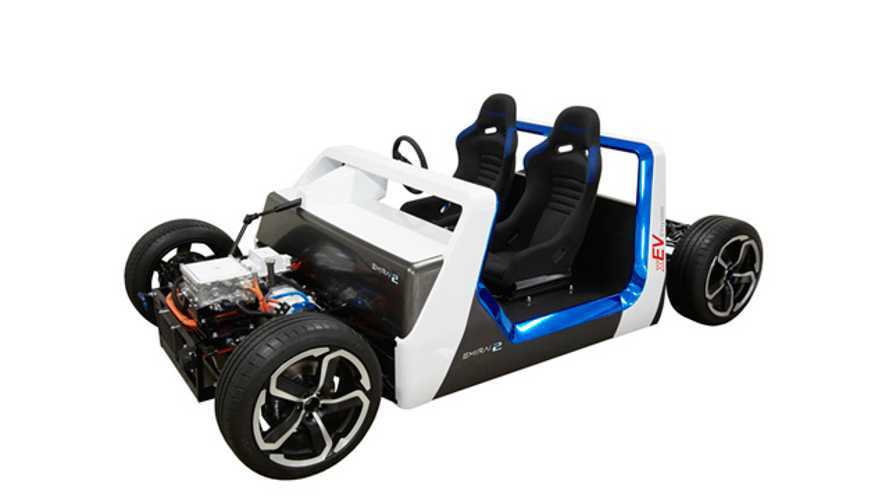 Mitsubishi Electric, which is a separate company to Mitsubishi Motors Corporation, is at the 2013 Tokyo Motor Show presenting its latest electric drivetrain products fitted in EMIRAI 2 "xEV" electric vehicle.

The small 2-seater xEV gets 125 kW of peak power and AWD with three electric motors - ... No, that can't be right... actually, the front motor is bigger and drives two wheels.

This mean that Mitsubishi Electric has developed two different types of motors and is now looking to attract some automakers.

The EMIRAI 2 xEV is a four-wheel-drive EV with a maximum output of 125kW. It is equipped with three motors, one to drive the front wheels and two to drive the left and right rear wheels independently. Built with Mitsubishi Electric's proprietary original motor control technology, the vehicle promises a high-quality EV driving experience on any road condition.

High-precision Traction Control Traction control is important for safe driving on snowy roads, where tires can easily lose traction. The EMIRAI 2 xEV identifies tire slippage by controlling motor torque every 1msec (1/1000th of a second). If slippage is detected, motor output is precisely lowered to match the degree of slippage. The driver is informed when traction control is activated via an icon on the Intelligent Information Panel.

The EMIRAI 2 xEV's Low-speed Level Control enables the driver to maintain constant low speed on uneven roads, which is not possible with internal-combustion vehicles. For example, when driving over speed bumps or on graded roads, motor output torque is instantly controlled in response to differences in road level to eliminate unnecessary acceleration or braking, making it easy to maintain the car's desired position.

The second prototype has nothing to do with motors. xDAS is a "Driving Assistance Concept Car" recalling a computer on wheels. Mitsubishi Electric demonstrates some new technologies in xDAS, which can be implemented in any vehicles regardless of the drive:

"The EMIRAI 2 xDAS EV concept car combines an interior design, information systems and advanced operation harmonized to the driver under the concept of a highly driver-oriented car. It incorporates Mitsubishi Electric's advanced technologies for video display, image sensor processing and human-machine interface to assist the driver in achieving exceptionally safe and comfortable driving."

Driver-oriented interior The EMIRAI 2 xDAS is equipped with the Intelligent Information Panel, a next-generation display that seamlessly changes its appearance and content in response to driver preferences and driving conditions, ensuring that the driver always has the desired and required information in an easy-to-understand fashion.

Driver-oriented information The Intelligent Information Panel presents information about potential driving dangers and other essential information that the driver requires.