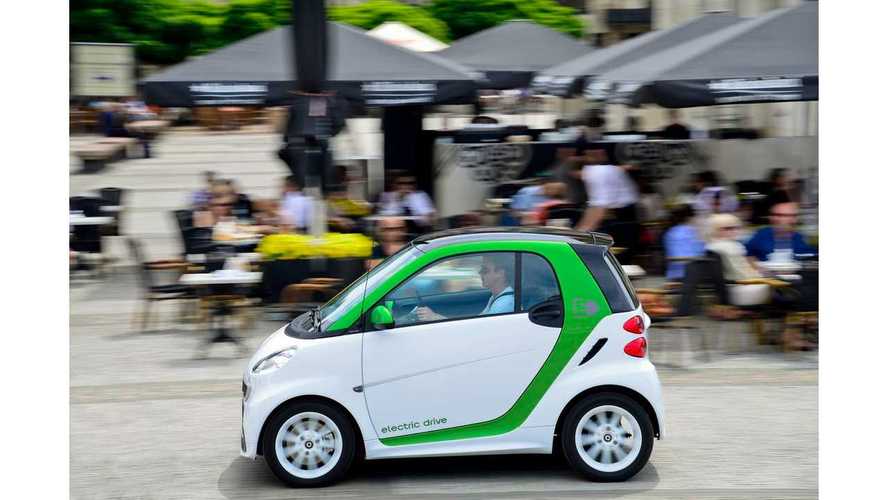 Smart announced at the 2013 Guangzhou Motor Show that it has become the first European manufacturer to bring an all-electric vehicle to the Chinese market.  And this is true, as no one else is exporting electric vehicles to China from Europe.

Smart fortwo electric drive is now available at dealerships in China as well as in 13 other countries (mostly in Europe but also in some areas of USA, Canada and Japan).

"Our smart electric drive was one of the first all-electric cars and is the clear market leader in Germany. We are now bringing this successful vehicle to China, and are the first European manufacturer to launch an all-electric car on this market. Offering powerful driving pleasure with zero local emissions, the smart electric drive is perfectly suited to China's big cities."

The smart ED Rolls Off The Line In France

Smart also mentioned that has around 40 percent of the EV market share in Germany and that approximately 93 percent of customers would recommend the smart electric drive to other. Last month smart delivered over 300-units in Germany.

The specs of smart ed in China are basically the same as in other places. 55 kW electric motor from EM-motive (a Daimler joint venture with Bosch) and lithium-ion battery with 17.6 kWh produced by Deutsche ACCUmotive (a Daimler joint venture with Evonik). Vehicles are manufactured in the Hambach smart factory in France, alongside the various ICE versions of the fortwo.