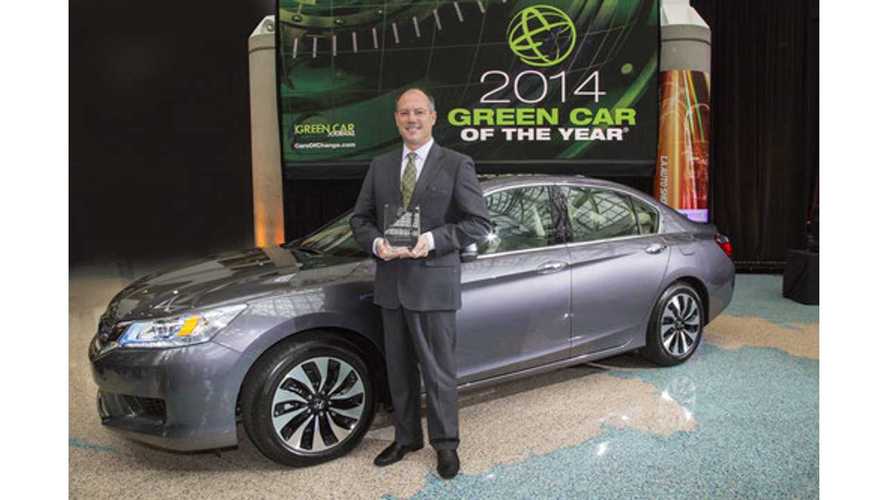 If only the Tesla were fun to drive & a leap forward in technology, then it might get nominated for Green Car of the Year!

The mission of Green Car Journal (as I understand it) is to "emphasize a joyful driving experience," while  considering the categories of environmental impact, advancement in technology and fun-ness to drive.  Sounds like a Tesla Model S to me, or does it? Turns out, Tesla wasn't even nominated for 2014 Green Car of the Year award by Green Car Journal.

Accord PHEV gets the nod for Green Car Journal

Let us reconsider the Journal's list of nominees for 2014:

Our very own Jay Cole spoke of this list way back in October, only he went easier on the Green Car Journal's selections than I will.

Additionally, consider the panel of judges in this "fun yet environmentally-positive car of the year" award:

Did this get nominated because it offered a joyful driving experience?

Now, the results start to make sense. We've got a group whose job titles far surpass their role as test drivers and judges in the Green Car Award. Jay Leno looks to be one of the few on the list worthy of voting in the GCJ Green Car of the Year award.

What vehicle will GCJ pick next year? My money is the 2014 Chevrolet Colorado diesel...

Oh, did I forget to mention this year's winner of GCJ's Green Car of the Year award?  Sorry...it's in the press release below

After giving heavy consideration to each of the five finalists nominated for the Green Car of the Year® program, Green Car Journal named the 2014 Honda Accord winner of its prestigious award for 2014. This award honors the 2014 Accord model in all its iterations, including the Accord, Accord Hybrid, and Accord Plug-In. The announcement was made live from the LA Auto Show® floor, in front of a crowd of thousands of esteemed international journalists and industry VIPs on Nov. 21.

Honda's Accord emerged on top of an exceptional field of finalists including the Audi A6 TDI, BMW 328d, Mazda3, and Toyota Corolla. According to Green Car Journal editors, the Accord has evolved in important ways to meet the needs of an increasingly sophisticated and changing market that seeks ever-higher fuel efficiency, lower CO2 emissions, and improved environmental impact, without sacrificing the features and driving experience expected by new car buyers. The 2014 Honda Accord brings notable efficiency with its conventional gasoline powerplants, and now ups its game with highly-efficient Accord Hybrid and Accord Plug-In hybrid choices that achieve up to 50 highway mpg or, in the case of the Plug-In, 115 MPGe, the highest of any mid-size hybrid sedan in the country.

"Honda's 2014 Accord clearly leads by example in the 'green' space and is a deserving winner of the 2014 Green Car of the Year® honor," said Ron Cogan, editor and publisher of the Green Car Journal and CarsOfChange.com. "Mainstream buyers have long found the Accord a popular choice because of its efficiency, functionality, safety, and value. With the addition of exceptional hybrid and plug-in hybrid versions to the already-fuel efficient Accord line, Honda's Accord becomes an even more compelling choice."

In the Green Car of the Year® program, Green Car Journal editors identify five finalists after an extensive vetting process and the winner is selected by a majority vote of the Green Car of the Year® jury. Nominees are exemplary in that they forward environmental performance in meaningful and quantifiable ways while also presenting an accessible choice to enough consumers to make a real impact on the environment. Vehicles that are all-new or in the earliest stages of their model lifecycle carry additional weight, with models vetted in a previous award year considered only if significant changes to that model have occurred. Green Car of the Year® honors are reserved for production vehicles on sale by January 1 of the award year.

"Having our most popular model, the Accord, honored as the 2014 Green Car of the Year® is a tribute to the company's long-term commitment to offer advanced fuel-saving technologies in mainstream vehicles," said Mike Accavitti, senior vice president of Automobile Operations for American Honda. "Offering fuel-efficient 4-cylinder and V6 engines alongside class-leading hybrid and plug-in hybrid models, the 2014 Accord family provides environmentally conscious shoppers more options than ever before."

Invited 2014 Green Car of the Year® jurors include leaders of many of the nation's most notable environmental and energy efficiency organizations including Jean-Michel Cousteau, president of Ocean Futures Society; Kateri Callahan, president of the Alliance to Save Energy; Matt Petersen, board member of Global Green USA; Frances Beinecke, president of the Natural Resources Defense Council; and Dr. Alan Lloyd, president of the International Council on Clean Transportation and former head of the California Air Resources Board and Cal/EPA. Auto enthusiast and Tonight Show host Jay Leno and Green Car Journal editors round out the jury.

"When you consider the Honda Accord's cost and the mileage it delivers with standard and hybrid power, you're not only economically ahead of the game but also improving environmental impact by using less petroleum and cutting CO2 emissions," said Jean-Michel Cousteau, president of Ocean Futures Society and a Green Car of the Year® juror since the award's inception.

Green Car Journal has been honoring the most important 'green' vehicles every year at the LA Auto Show, since its inaugural award announced at the show in 2005.

About Green Car of the Year®

The GCOY award is an important part of Green Car Journal's mission to showcase environmental progress in the auto industry. Since 1992, Green Car Journal has focused on the intersection of automobiles, energy, and environment. Today, the magazine is considered the premier source of information on high fuel efficiency, low emission, advanced technology, and alternative fuel vehicles. CarsOfChange.com presents 'green car' articles online along with a focus on infotainment and connectivity. Green Car of the Year® is a registered trademark of Green Car Journal and RJ Cogan Specialty Publications Group, Inc.