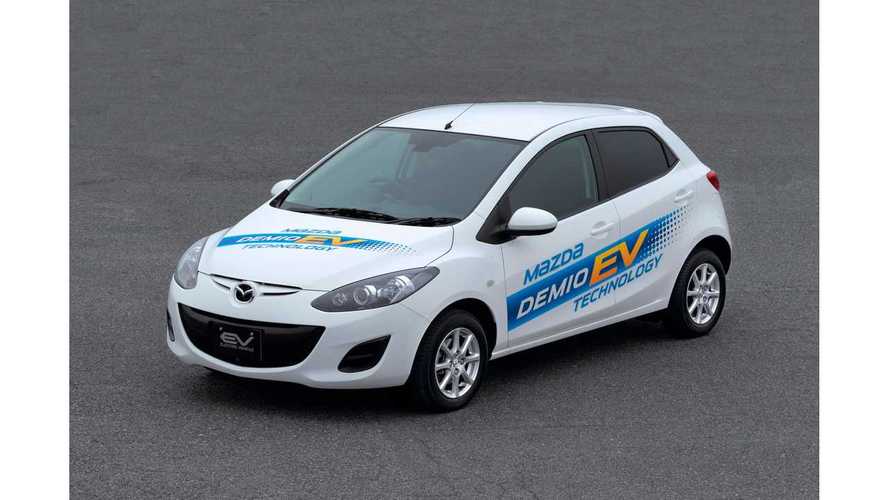 For years now, Japanese automaker Mazda has been wheeling out various versions of its electrified Mazda 2 (aka Demio overseas).  None of these versions have made it into "production," though a few handfuls are on public roads.

Now, Mazda has this range-extended version out there and we're thinking it may actually be production bound.

For starters, this version of the Mazda 2 features a 20-kWh lithium-ion battery pack and a 100 hp electric motor.  Range-extending duties are accomplished by a 330-cc 26-hp rotary engine (this engine won't make it into production, as even Mazda says it's too dirty).

Like the BMW i3, the Mazda 2 features the REx engine under the hatchback's load floor.  It's sandwiched down there in almost an identical spot as you'll see it in the i3.

Another i3 similarity pops up too and this is why we're thinking some version of the Mazda 2 REx is production bound.  The Mazda 2 with REx has a gas tank that's sized identically to the BMW i3.  We know that BMW choose the i3's tank size to comply with California guidelines, so we have to assume Mazda did the same here.

While Mazda won't official say whether or not the Mazda 2 REx is production bound, we happen to believe that it could enter the production cycle almost immediately (Mazda would have to swap the rotary engine for a scooter motor like the BMW i3 employs) if Mazda were to give it the green light.

If this green machine makes it to production, then we sure would know what it's gonna be like, right?  For that info, we turn to Autocar's test drive review of the REx Mazda 2:

"Like the BMW i3 range extender, the Mazda 2 EV range extender’s range is dictated by its fuel-tank capacity, which coincidentally matches the new BMW exactly at 9 litres."

"Mazda draws a further parallel with the high-tech BMW, saying that early studies indicate CO2 output might get close to the carbonfibre i3. BMW quotes 13g/km; Mazda says its range extender might hit 15g/km, although it stresses that the number hasn’t yet been measured."

"This was a very short drive in an early engineering prototype, so it is more appropriate to report impressions rather than draw firm conclusions, but overall the feeling is of a fascinating new powertrain with considerable promise."

"Like all electric cars, the Mazda delivers smooth, quiet and instant performance from rest. Acceleration builds gently, thanks to the relatively modest power outputs for the battery and range extender, but felt a little adrift of the 10.8 secs to 62mph from rest that Mazda quotes."

"Responsiveness was good, as was the refinement on/off the accelerator pedal, which says volumes for the sophistication of Mazda’s calibration of the motor and its controller at this early stage."

Autocar notes that Mazda hasn't worked on any of the NVH elements of this vehicle and says that further tuning is required.  It's an early-stage prototype though, so we'll overlook those mentions for now.

Of particular interest to us is the similarities between this Mazda and the i3.  Yes, the i3 is a far more capable performance machine, but there's something to be said of the fact the Mazda mentions the i3 in the same breath of this REx Mazda 2.  Surely the Mazda 2 REx would be significantly cheaper than the i3, that is, if it ever makes it into production.  And two somewhat similar REx options out there are definitely better than only one.