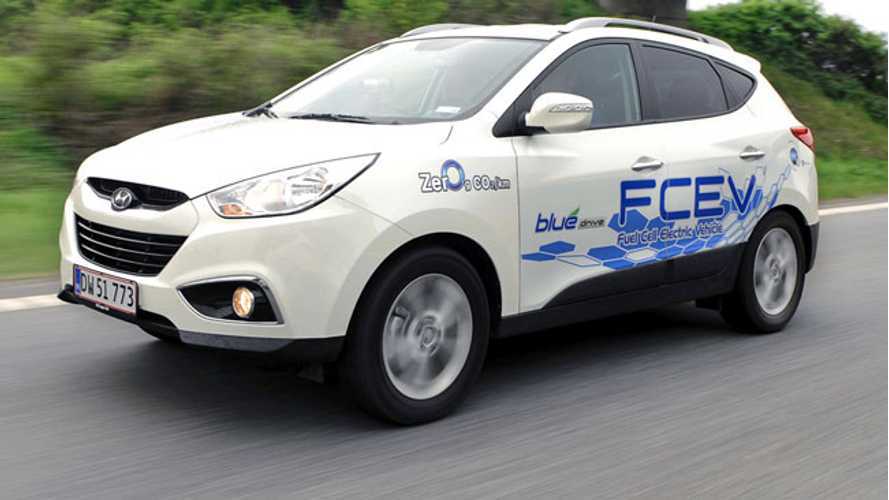 Automakers Now Trying to Prove That Hydrogen is Indeed Safe

At the 2013 Tokyo Motor and the 2013 LA Auto Show, several fuel cell vehicles hit the stage.  With those appearances again came the promise that mass production hydrogen vehicles are right around the corner.

John Krafcik, chief executive of Hyundai Motor America, told the LA Times that it's a “coming out party for hydrogen.”

Hyundai's fuel cell vehicle will launch in extremely limited numbers in 2014, while Toyota and Honda say 2015 will be the year that their FCEVs arrive in mass.

Problem is, mass means somewhere in the neighborhood of a couple hundred vehicles from all 3 automakers combined.  That's not mass.

Regardless, the less-than-a-handful of automakers interested in fuel cell technology insist that the arrival of the FCEV will spell the end of the EV.

Bill Fay, general manager of Toyota's U.S. sales division, says the automaker's first production FCEV "has the same potential as the first Prius."  The Prius is today's best-selling hybrid and is in fact the #1 selling vehicle in all of California.  Does Toyota think its FCEV will achieve that status?

As the LA Times writes:

"The global automakers believe cars powered by fuel cells represent the best path to building the zero-emission vehicles now demanded by regulators in California and many other states and, increasingly, by consumers. Using hydrogen to create electricity, fuel cells combine the best of electric and gasoline cars without the downsides, the automakers say. They drive like electric cars — quietly, with tons of off-the-line power — but can be refueled just like gasoline-powered cars."

Refueled where?  At the dozen or so stations in the US?

"The challenge: Producing them cheaply enough to entice consumers and building enough hydrogen fueling stations to keep them on the road. Initially, the cars are expected to cost more than comparable gasoline-powered and electric vehicles, though they probably will qualify for government incentives to buyers. The sticker prices are expected to come down if automakers can sell the cars in volume."

Yes, the sticker prices will fall over time, just as they already have with electric vehicles, but FCEVs are years behind EVs to market and, as such, will always be racing to catch up on price point.

Isn't hydrogen explosive and dangerous?  As the LA Times explains, Matt McClory, one of the principal engineers of the Toyota fuel cell vehicle, says Toyota has fired rifle bullets into its hydrogen tanks and can't get them to explode.

"The smaller-caliber bullets would just bounce off the tank. It took a 50-caliber armor-piercing bullet to penetrate the tank, and it then just left a hole and the gas leaked out."

That's fine, but trying to convince the general public that hydrogen is safe is not going to be easy, especially when most still believe lithium-ion batteries are unsafe.  With an FCEV, you've got both a hydrogen tank and a lithium-ion battery on board.  Good luck convincing the masses that's somehow safe.

Mike O’Brien, Hyundai’s vice president of product and corporate planning, see this "Hindenburg" perception as a true challenge for automakers.  As O'Brien says:

“The car meets the same crash standards of any other car we sell.  But only miles on the road, and people in the seats of these vehicles, will overcome those perceptions.”

In 2020, we'll revisit this topic.  By then there may well be a few thousand FCEVs on the roads, compared to a couple million EVs.  In 2020, we bet a few automakers will continue to claim FCEVs are the future.  Those same automakers will be selling hundreds of thousands of EVs every year.  Oh the irony.