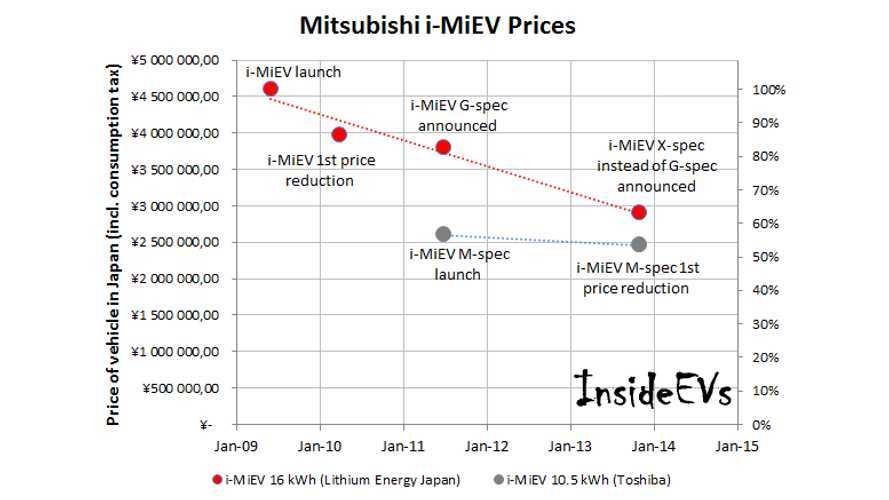 When we compare the nominal yearly price of the Mitsubishi iMiEVs, we find some interesting results.

In June 2009, when the 16-kWh version was introduced for fleets, its MSRP including consumption tax, but without subsidies was at ¥4,600,000.

The improved G-spec version in 2011 was approximately 17% cheaper than the original and now again the new X-spec, which is replacing the G-spec with several slight improvements, is less expensive.

In total, Mitsubishi lowered the price of the i-MiEV by almost 40%, which after 4.5 years works out to a drop of over 8% per year on average.

The battery pack from Lithium Energy Japan still has 16 kWh of energy, the drivetrain has slightly better performance and car is slightly more refined with additions like LED lights, charging inlet backlight and remote access.

Interesting too is the M-spec version, introduced in 2011 together with G-spec. This car has the less powerful drivetrain and just 10.5 kWh of energy in battery pack. Lithium-ion cells in this version use a different chemistry from Toshiba. Toshiba's Super Charge Ion Battery (SCiB) are one of the heaviest form of li-ions out there, but has great performance in almost all aspects (excluding price). They are long-lasting and can be fast charged in just 15-minutes in i-MiEVs.

But as we see on the graph, the price of that version is not falling by as much. Just a few percent, actually.  Maybe it's the because M-spec now has more standard equipment,but when difference in price between the M-spec and X-spec is just 18%, who will now buy M-spec with 2/3 the range of the base 16 kWh i-MiEV?

Is Toshiba capable of lowering the price of SCiB, used too by Honda in the Fit EV in Japan and U.S.?