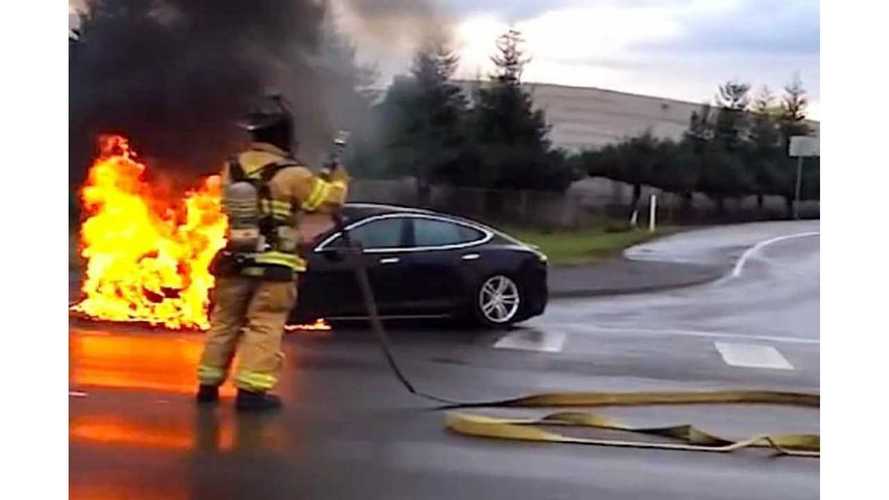 On November 15 (several days prior to the statement issued by Tesla CEO Elon Musk, which includes this sentence..."we have requested that the National Highway Traffic Safety Administration conduct a full investigation as soon as possible into the fire incidents"), the National Highway Traffic Safety Administration quietly opened a formal investigation into all 2013 Model Year Tesla Model S sedans sold in the US.

Update: Elon Musk issues these Tweets, one of which is clearly an indirect statement made after reading this article on InsideEVs:

The NHTSA estimates that 13,108 Model S sedans are part of this "Preliminary Evaluation," aka PE.  Why only Model Year 2013?  We haven't a clue.  Our initial guess is that the NHTSA believes this will somehow cover all Model S sedans in the US, though that's not accurate since there are Model Year 2012 Model S sedans out there.  Assume for now that this investigation actually includes all (60-kWh, 85-kWh, P85+, Signature versions and so on) Model S sedans sold in the US.

A potential issue we see is with Tesla saying that it "requested" the investigation, when in fact the NHTSA makes no mention of this action being done at the automaker's request. (See Update)

The NHTSA's statement on the matter is as follows:

"The National Highway Traffic Safety Administration is deeply committed to safeguarding the driving public. The agency has opened a formal investigation to determine if a safety defect exists in certain Tesla Model S vehicles. The agency’s investigation was prompted by recent incidents in Washington State and Tennessee that resulted in battery fires due to undercarriage strikes with roadway debris."

The official reasons released by the NHTSA for the preliminary evaluation read:

Deformation/intrusion into the propulsion battery by roadway debris may result in a thermal reaction and fire.

The Office of Defects Investigation (ODI) is aware of two incidents occurring on US public highways in which the subject vehicles caught fire after an undercarriage strike with metallic roadway debris. The resulting impact damage to the propulsion battery tray (baseplate) initiated thermal runaway. In each incident, the vehicle's battery monitoring system provided escalating visible and audible warnings, allowing the driver to execute a controlled stop and exit the vehicle before the battery emitted smoke and fire.

Based on these incidents, NHTSA is opening this preliminary evaluation to examine the potential risks associated with undercarriage strikes on model year 2013 Tesla Model S vehicles.

Mr. Strickland made this statement to the Detroit news:

“Investigations are independent. We have never — in my recollection, before I got to NHTSA (as a Senate staffer) or as administrator — have actually had an automaker ask for a formal investigation, but it causes a couple of implications: If a manufacturer asks me or asks the agency for a formal investigation, you’ve already made a determination that you may have a defect that imposes an unreasonable risk to safety... I don’t think that would ever happen.”

In general, it takes several months for the NHTSA to upgrade a preliminary evaluation into a full-blown engineering analysis.  If it reaches that point, then a recall is typically issued.