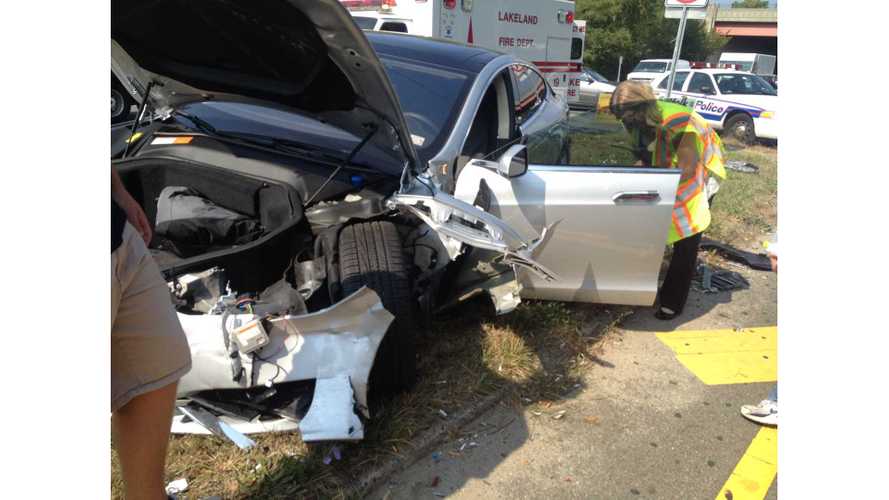 The NHTSA says it and Model S owners (at least those involved in a collision) agree...the Tesla Model S is safe...damn safe.

One fiery Model S doesn't suggest to us that the vehicle is unsafe.

However, owner testimonials (including the one from the fiery Model S) almost unanimously agree that there's no safer place to be if involved in a vehicular accident, than behind the wheel of a Model S.

Here we tell the story of Joe Dovi, a Tesla Model S owner who InsideEVs contacted directly in regards to an unfortunate accident he was involved in that we relayed to us via the Tesla Motors Club.

Dovi explains the event as follows:

", I was in a terrible car accident with my beloved Model S. I was hit by a driver who was talking on her cell phone and blew a red light. I got slammed at full speed while passing through an intersection. I was lucky enough to walk away with no broken bones while the person who hit me left in an ambulance."

"I can tell you with absolute certainty, my Model S protected me where other cars would have failed. This recent story of the car being unsafe due to a battery fire is ridiculous. My car did not so much as smoke, and not a drop of liquid was released."

"The car hit me with such force I cannot describe the G's I felt, but miraculously the other car literally bounced off, spun around, and hit me AGAIN in the rear. My car slid into a grass median while the other one wound up on the other side of the road facing the opposite direction. They had no chance against the Model S, it was remarkable."

"I was a bit surprised that the air bags did not deploy in my car (the other car's did). Then again, my body made no contact with the interior of the car so apparently the air bags were not needed"

"Tesla called my home shortly afterwards saying that they received multiple alarms from the car and wanted to make sure I was ok. They picked up my car free of charge and transported it 50 miles to the nearest service center. They are also arranging a loaner Model S. Can I ask for more"

But it's this statement by Dovi that most accurately conveys how he feels of the Model S:

"This is the safest car on the road hands down, and for me, I can say honestly say it saved my life. Thank you Elon..."

Within days, Dovi got his Model S loaner, a white P85:

Oh the joys of owning a Model S...where's my P85 loaner, I seem to have wrecked my Tesla lunchbox

Whether or not the Model S truly saved Dovi's life is not important.  The Model S prevented injury to Dovi in a serious wreck.  Speculating on whether or not this could/would be a fatal wreck in a lesser vehicle is not the point.

Bringing true life stories like this to the public's attention (especially after the negative press from the recent Model S fire) is what we do.

*Special thanks to Joe Dovi for allowing us to present his story (along with the spectacular images) to our readers.