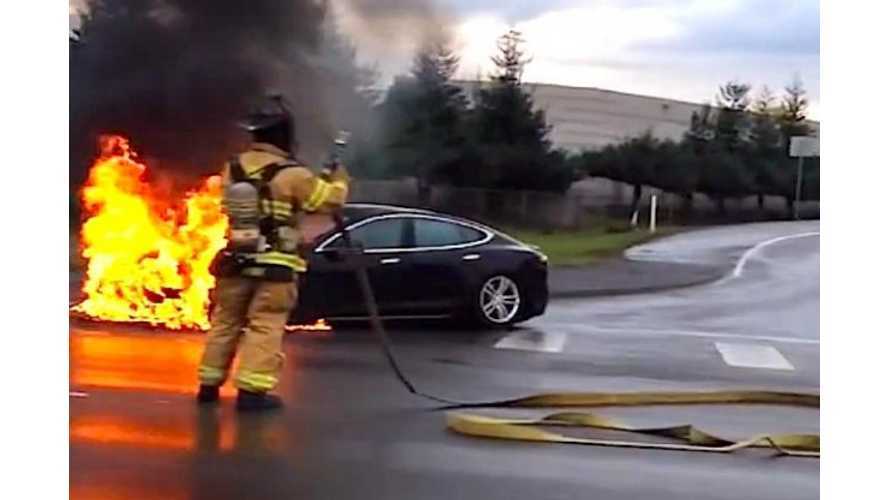 Tesla Motors now has in its possession one singed Model S.

Model S Not on Fire

WIRED has confirmed that the Model S that was engulfed in flames on Tuesday is now at one of Tesla Motors' facilities.  Most likely it's at Tesla's factory in Fremont, California.

Tesla is already "studying what happened" to The Model S, according to Tesla spokeswoman Elizabeth Jarvis-Shean.

Tesla issued its official statement on the Model S fire on Friday, but that doesn't mean it's case closed.

Tesla will now closely inspect the damaged Model S and we do believe a "findings" report will be released at some point in time.

What's been widely missed in the vast amount of reports on the Model S fire is that the vehicle's on-board systems may well have prevented injury or even saved the driver's life.

The driver was alerted of a fault in the Model S by the vehicle's systems.  He then pulled over and safely exited the Model S prior to the start of the fire.

It's obvious from this that the thermal event within the battery pack was well controlled (likely by that gel/foam Tesla employs to control such events).  The thermal event occurred well before flames emerged, showing us that the Model S, at least in this instance, provided the driver with ample time to exit the vehicle.  In fact, the driver had enough time to exit the freeway, pull to the end of the off ramp and step out of the Model S before the fire flared up.

The same often does not hold true when it comes to gasoline vehicles, as there's not a similar warning system in place in ICE vehicles.  Additionally, there's often only a few seconds of time before the vehicle is engulfed in flames after a source of ignition reaches the fuel tank.