Audi: US "Government Has Unfairly Placed Bets on Electrics Over Clean Diesel Vehicles" 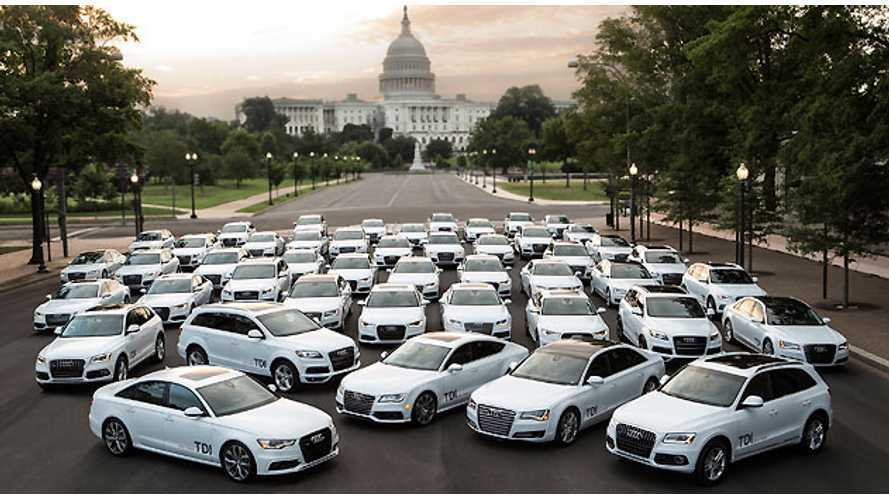 German automaker Audi has never been too keen for plug-in vehicles.

Audi A3 Sportback e-tron - While Audi Will No Doubt Continue to Complain Over Plug-In Vehicle Incentives...It Will Ironically Release This Plug-In, Which Of Course Will Benefit From the Incentives

The last Audi made a fuss over electrics was when it attacked Tesla Motors for no reason.

Now, Audi is back at it again.

However, this time around Audi isn't taking aim at a single automaker.

Audi is instead sounding off against the US Government and it's using an unusual method to do so.

Audi is turning to the results of a Harris Interactive survey to say that "half of American drivers think government has unfairly placed bets on electrics over clean diesel vehicles."

Wonder who makes these so-called "clean diesel vehicles" Harris is including in its survey.  Bet Audi does.

Ready to try to stomach what Audi says in its latest press release?  Here goes:

• Survey conducted by Harris Interactive among over 1,600 American drivers to gain insight into clean diesel perception and adoption • 66% of drivers think the government should offer a tax incentive on clean diesel vehicles • 59% of 18-34 year old drivers said that if the cost of diesel fuel was on par with gasoline, they would purchase a diesel-powered vehicle

A new poll conducted online by Harris Interactive on behalf of Audi of America reveals that a majority of American drivers would support government initiatives aimed at spurring clean diesel vehicle sales in the U.S. The study was conducted in September, 2013 among 2,041 U.S. adults, among whom 1,629 identified themselves as regular drivers, driving their own personal vehicle at least once a once week or more often.

Long viewed as “the other” fuel, clean diesel in the U.S. is quickly becoming a viable everyday fuel choice for drivers seeking increased efficiency and performance.

Audi continues to be at the forefront of clean diesel with a dramatic expansion of new TDI® clean diesel offerings: the 2014 A8L, A7, A6, Q7 and Q5 models. Clean diesel delivers up to 30% better fuel economy and 12% to 30% lower carbon dioxide emissions than gasoline engines.

However, obstacles to mass adoption still exist. In fact, survey results show that 65% of American drivers would be in support of lawmakers’ efforts to make diesel more accessible to the American public; and 66% of drivers think the government should offer a tax incentive on clean diesel vehicles.

“Government has set very rigorous standards for future fuel economy, and we believe that clean diesel is perfectly positioned to help us achieve those goals. But, we argue that diesel needs an even playing field set by state and federal governments,” said Scott Keogh, President, Audi of America. “Audi believes there are a variety of viable alternative fuel solutions, including electric, but diesel is readily available today. If you take away the disincentives that state and federal taxation policy create, we potentially could see a big uptick in clean diesel vehicles sales.”

Government’s bet on electric vehicles viewed as unfair by American drivers A majority (57%) of American drivers feel the government has unfairly placed its bets in favor of hybrids and electrics over clean diesel vehicles, the survey also showed.

Unlike electric vehicles, with clean diesel there is no need for driver behavior change, except to move from one pump to the other, and no need for big infrastructure changes.

“I do believe that diesel owners should be included in alternative energy tax incentives. Most diesel owners buy the car for the increased gas mileage, and we deserve to be rewarded for our change in behavior in using an alternate fuel just as hybrid drivers are,” said Stephanie Lewis, Audi TDI clean diesel owner since 2010.

"One of the reasons we are seeing this disparity between age groups may be because younger generations don’t have the same misconceptions about diesel as older generations,” added Keogh. “The objective is to reward efficiency, and diesel is an efficient alternative available today. We need to level the playing field.”

This survey was conducted online within the United States by Harris Interactive on behalf of Audi of America from September 24-26, 2013 among 2,041 adults ages 18 and older, among which 1,626 drive regularly. This online survey is not based on a probability sample and therefore no estimate of theoretical sampling error can be calculated. For complete survey methodology, including weighting variables, please contact genesa.garbarino@pmkbnc.com.

To which we say...stop whining Audi.  It's time to move forward.