VIA Motors Signs $20 Million Deal With DoE For Corporate Fleets, Will Start Selling To Public In November 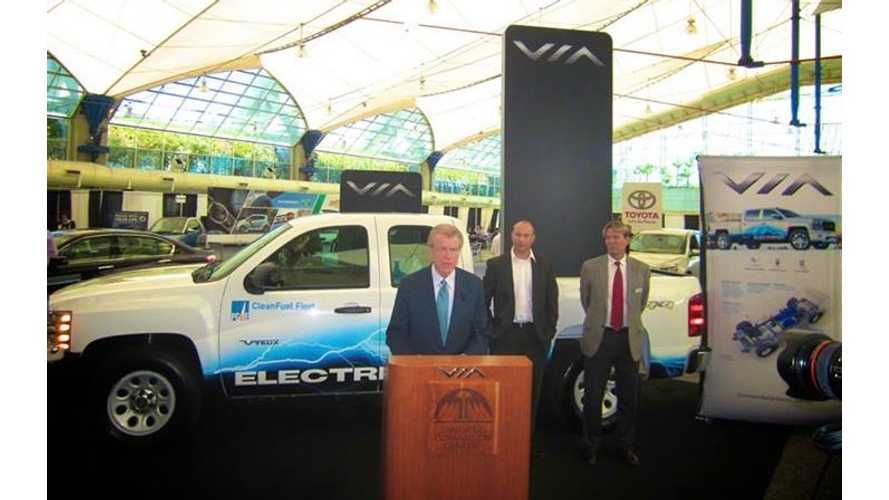 VIA Motors, maker of the plug-in VTRUX (it's a Silverado) and fronted by Bob Lutz, has signed a $20 million dollar with the DoE/South Coast Air Quality Management District (SCAQMD) to make it easier to supply fleets (including public agencies and utilities), with their 35-40 mile truck.

The basic premise of the deal is that the DoE will provide matching funds to help more than 50 public agencies buy some fairly expensive trucks and vans (the VTRUX starts from $79,000).   In return for this funding, Via will install what they call "proprietary equipment" to upload all the usage data for research studies.

At a press conference on Wednesday at the Plug-In 2013 electric vehicle show in San Diego, Alan Perriton, VIA Motors president was quite pleased with the development.

"The pick-up truck is the number one selling vehicle in America and VIA Motors is the only automaker building electric light-duty pick-up trucks, cargo vans and passenger vans.  The all-in cost is actually lower than driving a gas truck; this is very welcome news to budget-constrained fleets who spend more and more each year on ever-increasing gas prices, who can now save money and reduce their fleet emissions."

Mr. Perriton noted that over 8 years he thinks a VTRUX can save a fleet over $37,000 in gas and operational expenses.  We guess this research study will eventually confirm or deny this claim.

More details (and the official press release can be found below).

However what is of more interest to us, is that this new infusion of money has likely given VIA the confidence to now separately announce that they will finally being selling product to the average Joe who really just wants a plug-in truck or van; which if you look at the monthly sales in America is more than half the population.

"We will begin selling to the general public at the Los Angeles Car Show."

For those not familiar with the LA Auto Show, it kicks off November 22 and runs through December 1st at the Los Angeles Convention Center.

As for when the first deliveries will be made, those will begin rather quickly too according to the company promising "...early 2014 delivery."  VIA also says you can go to their site to get on a waiting list, but also notes that the list "is getting extremely long."

SAN DIEGO, CA -- (Marketwired) -- 10/02/13 -- In a press conference today at the Plug-In 2013 electric vehicle show in San Diego, California, VIA Motors president Alan Perriton announced that VIA has signed a contract to build & deliver $20 million of electric pick-up trucks and vans to over 50 participating fleets. In addition, VIA will install proprietary technology into each vehicle that will record and transmit real-time data to allow the DOE to quantify improvements in fuel economy and emissions.

The contract is administered by the South Coast Air Quality Management District (SCAQMD) with the Electric Power Research Institute (EPRI) acting as project manager. The California Energy Commission is also participating the program. The DOE plans to publish the data for use by government agencies, participating fleets and the general public to use to help quantify the benefits of operating plug-in electric vehicles. VIA's electrified pickup trucks have already demonstrated the potential to reduce gas consumption and emissions by up to 80% on average in early beta testing with large fleet customers.

"Plug in electric passenger vehicles are now becoming widely commercialized," said Matt Miyasato, SCAQMD's deputy executive officer for Science and Technology Advancement. "Expanding the commercialization of near zero-emission vehicles to include pickups and cargo vans will drive us closer to our goal of a near-zero emission transportation sector."

"The pick-up truck is the number one selling vehicle in America and VIA Motors is the only automaker building electric light-duty pick-up trucks, cargo vans and passenger vans," noted Alan Perriton, VIA Motors president. "The all-in cost is actually lower than driving a gas truck; this is very welcome news to budget-constrained fleets who spend more and more each year on ever-increasing gas prices, who can now save money and reduce their fleet emissions."

The program includes technology installed in each vehicle that will record and transmit data to the Idaho National Lab (INL) for analysis by the DOE and EPRI. INL is one of the nation's leading national labs operated by the DOE and specializes in evaluating vehicle performance and energy consumption.