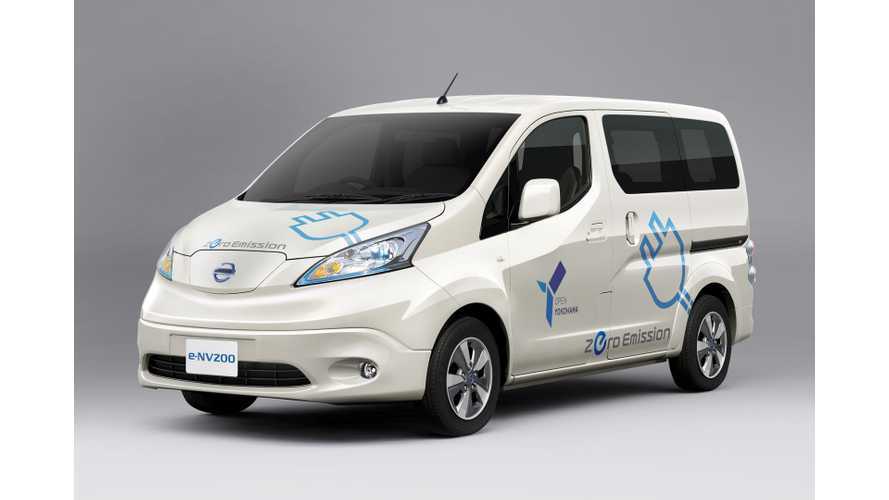 Nissan today announced that its second all-electric vehicle, the e-NV200 van, will go on sale in Japan in fiscal year 2014, which begins next April and ends in March 2015.

But what attracts our attention is this:

"...100% electric commercial vehicle, the "e-NV200," will arrive in the Japanese market during fiscal year 2014, and will eventually be sold worldwide."

This seems to mean that Nissan will sell the e-NV200 worldwide at some point after its launch in Japan.

Production will begin in mid-2014, so even Japan will likely get its first units in late 2014.

"The e-NV200 is Nissan’s second all-electric model available globally, following the world's best-selling EV, the Nissan LEAF. Production of the e-NV200 model will begin at Nissan’s plant in Barcelona, Spain in mid-2014."

Nissan is now in discussions with the government of the company’s hometown, the city of Yokohama, to use e-NV200 for public services. A separate project is coined in Barcelona, Spain where e-NV200s will appear as taxis.

"Measures to utilize the e-NV200 are evolving in Barcelona, Spain, which is involved in a mutually cooperative arrangement with Yokohama city in the formation and development of smart cities. Plans are being made to use the e-NV200 for smart transportation in Barcelona, such as for taxis. Along with this, preparations are in process to install a quick charger network and dedicated EV parking areas to support the taxis."