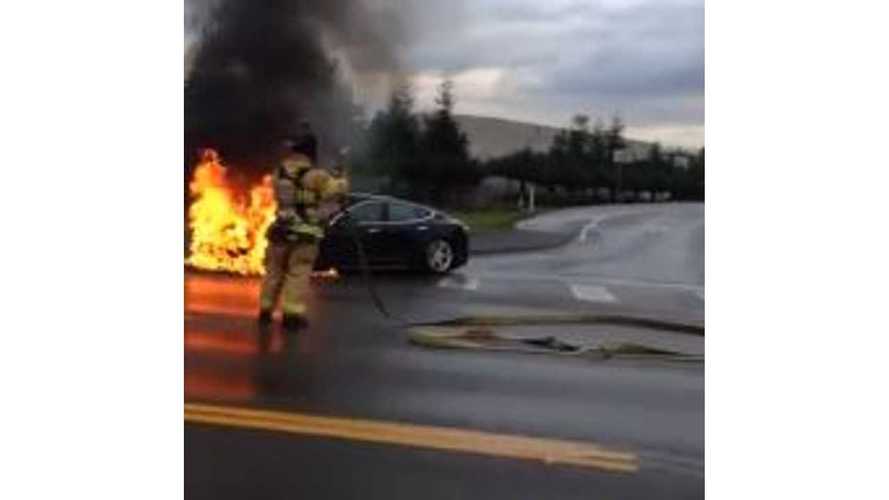 Yesterday, a Tesla Model S collided with a "large metallic object."  This video shows what occurred following the collision.

Tesla Motors issued this statement today on the matter:

"Yesterday, a Model S collided with a large metallic object in the middle of the road, causing significant damage to the vehicle. The car’s alert system signaled a problem and instructed the driver to pull over safely, which he did. No one was injured, and the sole occupant had sufficient time to exit the vehicle safely and call the authorities. Subsequently, a fire caused by the substantial damage sustained during the collision was contained to the front of the vehicle thanks to the design and construction of the vehicle and battery pack. All indications are that the fire never entered the interior cabin of the car. It was extinguished on-site by the fire department."

Update: Tesla spokeswoman Elizabeth Jarvis-Shean, says that the fire was the result of a "direct impact of a large metallic object to one of the 16 modules within the Model S battery pack."

"This was not a spontaneous event.  Every indication we have at this point is that the fire was a result of the collision and the damage sustained through that."

Update: An incident report has been released.  In part, it tells this story, according to ABC News:

"In an incident report released under Washington state's public records law, firefighters wrote that they appeared to have Tuesday's fire under control, but the flames reignited. Crews found that water seemed to intensify the fire, so they began using a dry chemical extinguisher."

"After dismantling the front end of the vehicle and puncturing holes in the battery pack, responders used a circular saw to cut an access hole in the front section to apply water to the battery, according to documents. Only then was the fire extinguished."

"The incident happened as the Tesla's driver was traveling southbound on state Route 167 through the Seattle suburb of Kent, said Trooper Chris Webb of the Washington State Patrol. The driver said he believed he had struck some metal debris on the freeway, so he exited the highway and the vehicle became disabled."

"The driver, who did not return a phone call seeking comment, told authorities he began to smell something burning and then the vehicle caught fire."

"Firefighters arrived within 3 minutes of the first call. It's not clear from records how long the firefighting lasted, but crews remained on scene for 2 1/2 hours."

Update 2: Below you'll see the actual incident report in its entirety: