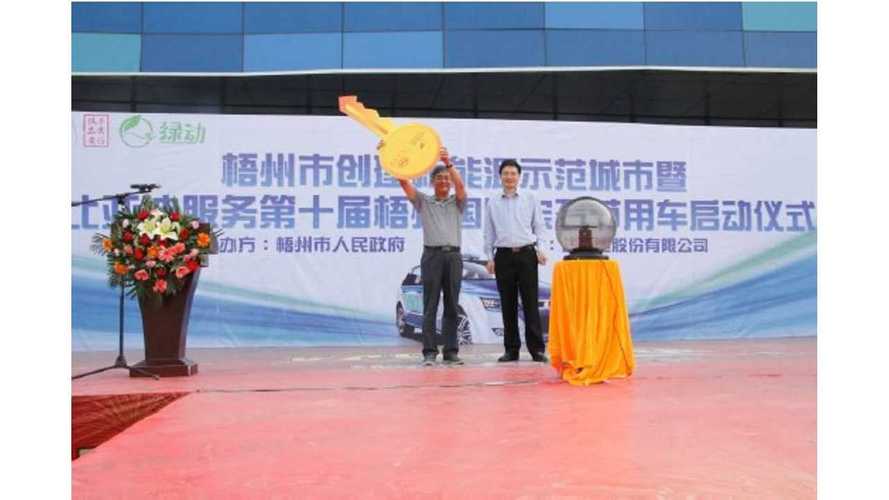 BYD won an October bid to supply 200 electric taxis to Wuzhou City in China.  A few days ago, the first batch of 30 e6 electrics with approximately 186 miles of range were delivered. The remaining 170 will come in the months following the Gem Festival.

"November 4th,2013: Ceremonies were held last Thursday during the Gem Festival celebrating a new face on the streets of Wuzhou City.  To kick start their clean city initiative, BYD Company Ltd has sponsored the first 30 of 200 BYD Electric Taxi vehicles that will go into operation throughout the year.  In front of the large crowd gathered to usher in this new era for the Pearl River Delta, BYD's General Manager Jie Wang passed a commemorative key to Chaowen Chen, Deputy Director of Wuzhou City’s Gem program.  The key represented “A Key to the Future” for this great Chinese city."

Whats more interesting is that the BYD e6 fleet in Shenzhen recently surpassed the 74.5 million miles mark putting the average at almost 250,000 miles per taxi in over three years!

According to Chinese company, the taxis lost only 9% of battery capacity.  Sounds unbelievably great!

BYD data about mileage in press release are wrong:

"In operation for more than three years now, the largest fleet in Shenzhen has proved its durability by recently surpassing the 120 million kilometer mark, putting an average of 400,000 kilometers per taxi with only less than 9% loss of battery capacity."

From other source we know: