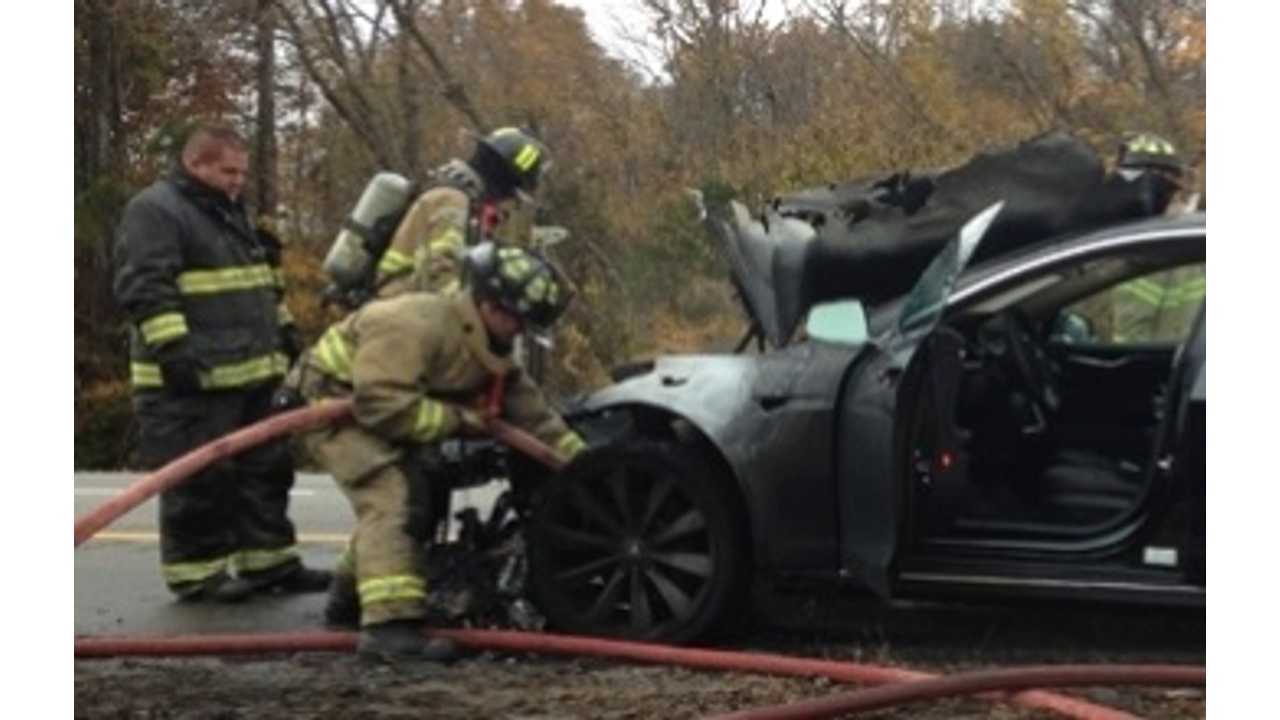 On Wednesday, November 6th, Tesla experienced its third Model S fire after a road collision in just over 5 weeks near Smyrna, Tennessee.

And while in both of the first two incidents saw Tesla's electric sedan ultimately cleared of any manufacturer defect, this most recent fire has once again opened up both the car and the company to some intense media scrutiny.

So much so that the NHSTA is considering getting involved.

Here is how the most recent accident was first reported by the Tennessee Highway Patrol:

“The driver, identified as Juris Shibayama, struck a tow hitch that was in the middle of a lane, which damaged the car’s undercarriage and caused the fire.”

Now Mr. Shibayama (38) of Murfreesboro, TN tells us himself what went down during his accident:

From a Model S owner in Tennessee

I was driving home from work on the interstate in the right lane at approximately 70 miles per hour, following a truck. In the middle of the lane, there was a rusty three-pronged trailer hitch that was sticking up with the ball up in the air. The truck in front of me cleared the object. I did not have enough time to swerve to avoid the hitch, and it went below my car. I felt a firm "thud" as the hitch struck the bottom of the car, and it felt as though it even lifted the car up in the air. My assistant later found a gouge in the tarmac where the item scraped into the road. Somewhat shaken, I continued to drive.

About 30-45 seconds later, there was a warning on the dashboard display saying, "Car needs service. Car may not restart." I continued to drive, hoping to get home. About one minute later, the message on the dashboard display read, "Please pull over safely. Car is shutting down." I was able to fully control the car the entire time and safely pulled off the left shoulder on the side of the road. I got out of the car, and started to get all my belongings out. About 5-10 seconds after getting out of the car, smoke started to come from the front underbody of the car. I walked away from the vehicle to a distance of about 100 yards. More smoke started to come out of the bottom of the car, and about two minutes after I walked away, the front of the car caught on fire.

I am thankful to God that I was totally uninjured in any way from this impact. Had I not been in a Tesla, that object could have punched through the floor and caused me serious harm. From the time of impact of the object until the time the car caught fire was about five minutes. During this time, the car warned me that it was damaged and instructed me to pull over. I never felt as though I was in any imminent danger. While driving after I hit the object until I pulled over, the car performed perfectly, and it was a totally controlled situation. There was never a point at which I was anywhere even close to any flames.

The firemen arrived promptly and applied water to the flames. They were about to pry open the doors, so I pressed my key button and the handles presented and everything worked even though the front of the car was on fire. No flames ever reached the cabin, and nothing inside was damaged. I was even able to get my papers and pens out of the glove compartment.

This experience does not in any way make me think that the Tesla Model S is an unsafe car. I would buy another one in a heartbeat.