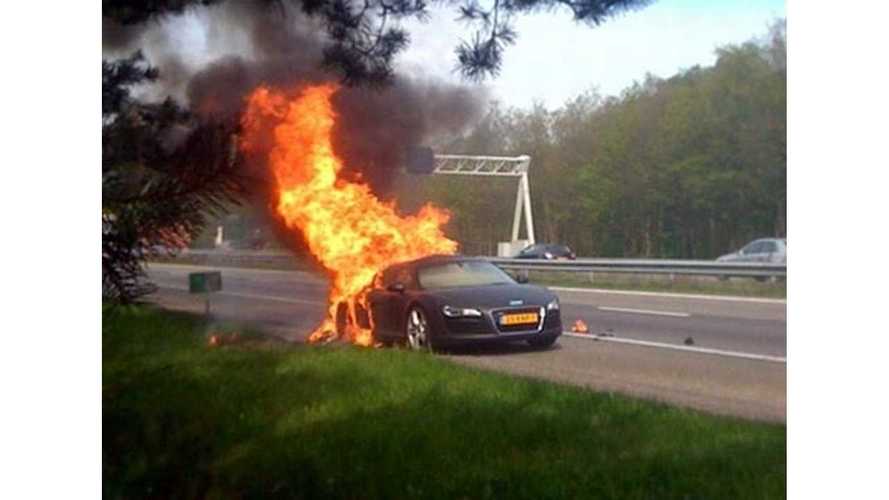 Much was made over Tesla’s third vehicle fire in 5-6 weeks.  Right leaning media attacked it as sign that EVs are not ready for prime time, and plug-in lovers pushed back that electrics are inherently safer than gasoline fueled vehicles.

So what do we really know?

Systematic record keeping for “highway vehicle fires” (HVF) first began in 1980.  Before that time data was not systematically collected on a national basis.  It is generally thought that the number of deaths from vehicle fires was substantially higher in the 60s and 70s, but surveys and studies from that time come up with widely varying numbers.

One such survey in 1973 of government agencies and university research found estimates of  vehicle related fire deaths ranged from 207 to 3500 annually.  Part of the reason for this large discrepancy is that it actually can be difficult to determine whether a person died from the initial accident and then was burned in the ensuing fire or rather the fire itself was the cause of death.  During that time period such a determination was not always or even often made.

Stories from this era of people being burned alive are legion.  Trapped by unyielding seat belts or otherwise pinned in by a deformed post wreck vehicle, horrified onlookers unable to do nothing but witness the gruesome demise.  My own high school Driver Safety teacher recounted a horrific scene of a friend being burned alive because his seat belt would not unbuckle.

One Seriously Destroyed Volt -Still Waiting on that Mushroom Cloud

Gasoline has not always been the number one cause of HVF deaths if  another report is accurate.  It suggests that the primary threat from vehicle fires has “changed from ignition of a small quantity of combustible interior materials by a lit cigarette, in 1960, to ignition of a large quantity of combustible interior and exterior materials by an impact-induced fire.”

Despite the lack of clear data, the need for improvement was recognized and resulted in enactment of  Federal Motor Vehicle Safety Standards (FMVSS) 301 for fuel system integrity in 1967 and and FMVSS 302 in 1972 for flammability of interior materials in passenger cars.

However, in the 1970s, manufacturers were able to get exemptions in certain cases, famously the Ford Pinto was able to get an exemption.  Indeed it was most likely the Pinto case and others like it that lead to the most drastic improvement in motor vehicle fire safety because the calculus of cost to correct unsafe design versus potential legal liability changed dramatically.

The Cadillac ELR And Chevrolet Volt Have The Same Protections For Their 16.5 kWh Battery

Using the 2011 HVF numbers we can calculate that given a current fleet of plug-ins numbering about 150,000 we would expect to see about 117 plug-in fires per year.  Using 1988 numbers would give 287 plug-in fires.  We have seen three.  Discount the Volt fire because it was two weeks after the fact and was the result of crash testing and also because they failed to discharge the damaged pack, which I would liken to leaving a damaged gas tank full of gas, something they NEVER do.

Likewise discount the one known charger fire because HVFs at gas stations are tallied seperately, and there about 5000 of those each year.

The big caveat to this calculation is that fires tend to occur in older cars when hoses and cables are brittle and frayed with time and wear.  The plug-in fleet is still very young which means the above comparison needs a very big asterisk.

There is no doubt there will be refinements to the structures and systems used to protect batteries.  Gasoline based systems have seen continual refinement for a century but fire based death and injury has not been eliminated.

When you look at the size of the Tesla battery and how low it sits, it is hard to imagine that anything thing that gets popped up into the under belly would not be a direct hit on the battery.  The plate  protecting the battery is substantial compared to typical unibody construction, but obviously it is not going to stop a chunk of metal that is levered up when a wheel rides over it.

It may be that the area between and around the wheels is a common strike area for metal objects that are run over.  The same would likely be true for the engine compart for objects that are struck by the front of the car and levered up.

Indeed observing a cut away of the Nissan Leaf you can see that they positioned the battery well away from the front wheels and “engine compartment.”

GM is also looking very smart to have positioned their battery in the center of the vehicle and to have it NOT be the lowest point of the undercarriage.

Ford has the battery on Focus Electric very low to the ground as well, but in their case the battery is positioned more towards the leading edge of the rear wheels.  Presumably a levered object would strike behind the battery if driven over by a rear wheel.

What this all means is that in all likelihood given the knowledge available today, the Tesla Model S is indeed more susceptible to fire than other plug-ins on the road, but compared to internal combustion cars it is much safer - at least according to early data point.

Indeed the fact that no other major model of electric vehicle has ever caught fire on any road in the US means that the Tesla may actually be finding itself penalized from that "pent-up" demand from those anticipating electric vehicle fires.   After all, they are so uncommon, why wouldn't an EV fire be big news?