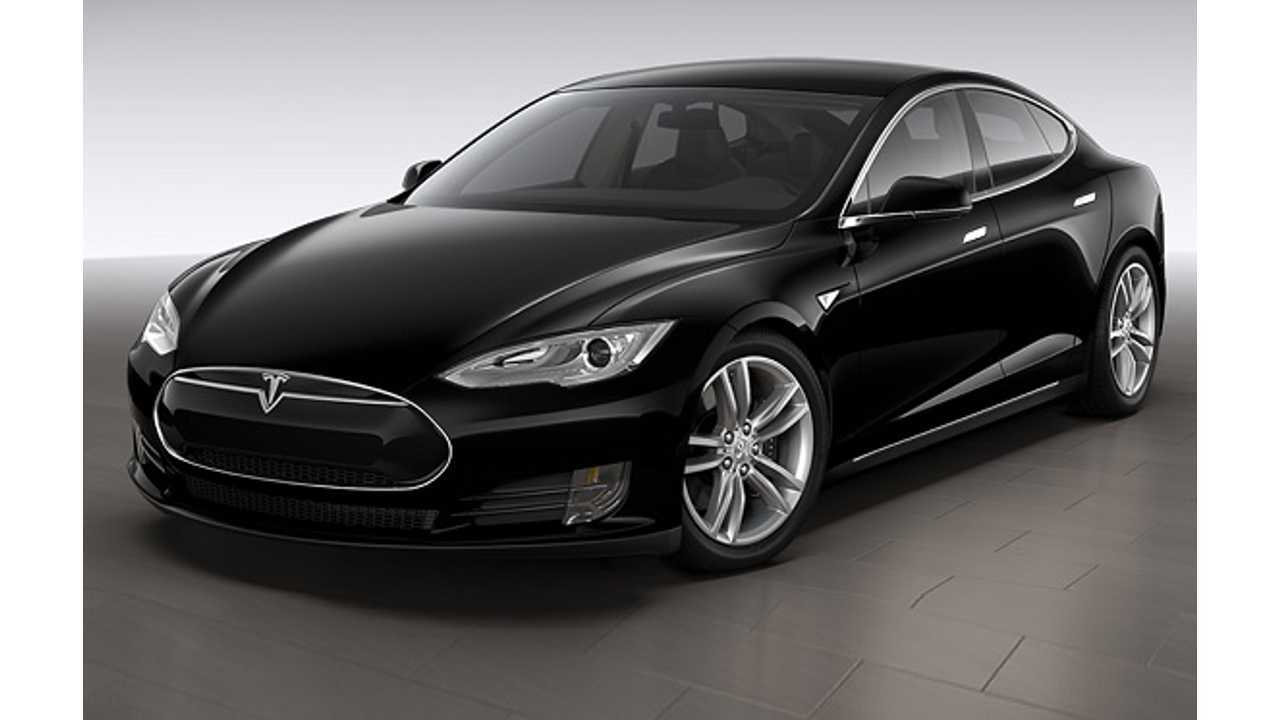 Now widely reported, a Tesla Model S supposedly had some "unintended acceleration," which led to it jumping a curb and landing on top of a 4.5-foot high retaining wall.

It seems miraculous to us that this 4,647.3-pound electric vehicle jumped 4.5 feet into the air.

What's even more suspect is that it jumped that high after hitting a curb that's one foot away from the retaining wall.  We're still trying got picture this in our heads, but try as we might, we just can't find this plausible.

Regardless, several media outlets are reporting that a formal unintended acceleration complaint, citing the culprit as the Tesla Model S, has been filed with the NHTSA.

It's one complaint fellas...cut the Model S some slack.

Why's this "news?"  It's obviously not, but it's an electric vehicle, so you can bet that media outlets will jump at the chance to pounce.

Here's the formal complaint in its entirety:

The car was going at about 5 mph going down a short residential driveway. Brake was constantly applied. The car suddenly accelerated. It hit a curb and the middle portion of the car landed on a 4.5 ft high vertical retaining wall. The wall is one foot away from the curb. The front portion of the car was hanging up in the air. The car was at about 45 degree up and about 20 degree tilted toward the right side. An engineer from Tesla said the record showed the accelerating pedal was stepped on and it accelerated from 18% to 100% in split second. He blamed my wife stepping on the accelerating pedal. But he also said there was a built-in safe-guard that the accelerator could not go beyond 92%. The statements are contradictory. If there is a safeguard that the accelerator cannot go beyound (not our typo this time...we promise) 92%, there would be no way that my wife could step on it 100%. There were some mechanical problem that caused the accelerator to accelerate on its own from 18% to 100% in split second.

These complaints have ZERO value until vetted.  If the NHTSA determines that the complaint is valid, then it will respond, but it won't do so over a single complaint.  Just take a look at the graphic to your right and you'll see tons of vehicles 1 unintended acceleration complaint, none of which have been recalled for that reason or even further investigated by the NHTSA.

But is this the first time a Tesla Model S has been blamed for "unintended acceleration."  Heck no...the darn thing is so powerful it unintentionally accelerates all the time and whoops all sorts of other vehicles in the process...On a more serious note, one Model S plowed the side of a restaurant approximately 6 months ago.  The driver initially blamed it on "unintended acceleration."  A complaint was never filed, most likely because the driver knew there was no merit to her claim.

These "unintended acceleration" cases pop up all the time.  InsideEVs uses magical/sarcastic math to peg the accuracy of those claims at something likes 0.016%, meaning they're almost always inaccurate and that the driver is often to blame.

Gas pedal...accelerator pedal...realizing the difference between the two must be rather difficult.

In closing, while we understand why some major media outlets find it necessary to spread this propaganda, it pains us to see green sites follow along.  Our duty is to crush the spreading of falsities related to electric vehicles.  It's not our responsibility to pass on misinformation.

Car On Retaining Wall...But as Part of Landscape Design

Retaining Wall Ready to Hit Unsuspecting Car - Looks to Be About 4.5 Feet Tall