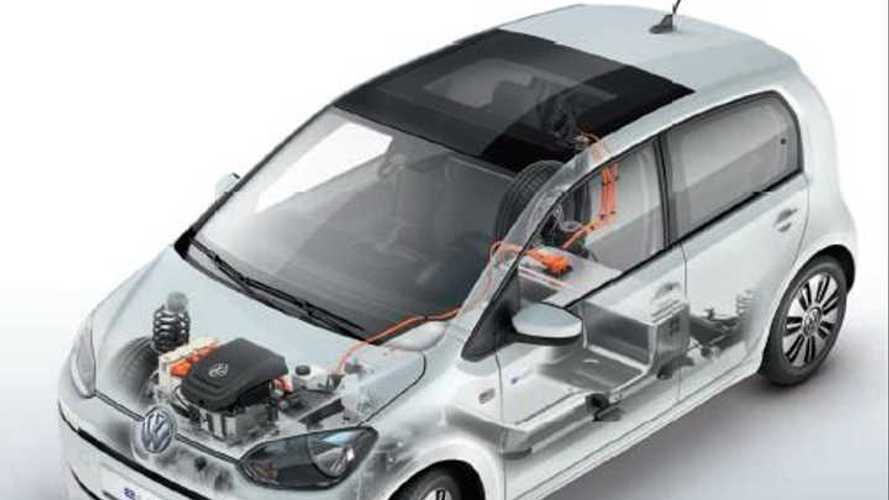 The electric drives for the e-up! are produced in the Kassel Baunatal plant. A new electric motor and transmission assembly has been specially created in the transmission plant.

In the latest Volkswagen ViaVision magazine, the German automaker featured its first production electric vehicle e-up! and some electromobility topics.

"Following a foreword by the new Board Member for Development of the Volkswagen brand, Dr. Heinz-Jakob Neußer, ViaVision explores all aspects of e-mobility, from batteries, through plugs and magnetic fields and back to the first electric research vehicle which was based on the first Golf and developed as early as 1976."

The battery systems for the e-up! are produced in-house in series in Brunswick. Forty employees produce 11,000 units per year.

Like Nissan, Tesla and BMW, Volkswagen is producing electric drives and battery packs in-house.  As the automaker explains in ViaVision:

"Next to the design, the drive is the main component that determines the customer’s relationship with his car. One could say the drive is like the heart of a car. Many customers buy a Volkswagen, among other reasons, because over many decades we have proven our compentence in drives. From the start it was important to us that we rely on autonomous development and production of alternative drives so that we could ensure all future Volkswagens with alternative drives are exemplary in every aspect. This is why we have worked intensively on the development of e-motors and battery systems, and developed the necessary production competence in our Kassel and Brunswick plants."

According to the magazine "The battery systems for the e-up! are produced in-house in series in Brunswick. Forty employees produce 11,000 units per year," which could indicate production capacity level. At 11,000 units, VW must sell almost 1,000 electric vehicle a month every month - this is rather ambitious taking into account relatively high price of e-up!, but it should be possible together with the e-Golf that will come next year.

Another important thing is that VW's electric cars don't have liquid cooling of the battery.  The German manufacturer argues:

"Cooling is not necessary: in driving mode the battery does not heat up beyond the permitted temperature range, even when temperatures are high outside the car."

The high-voltage battery of the e-up! is installed in the underbody of the vehicle.