Honda Says Accord Plug-In Hybrid Buyers Should Pay a $10,000 Premium Over the Accord Hybrid 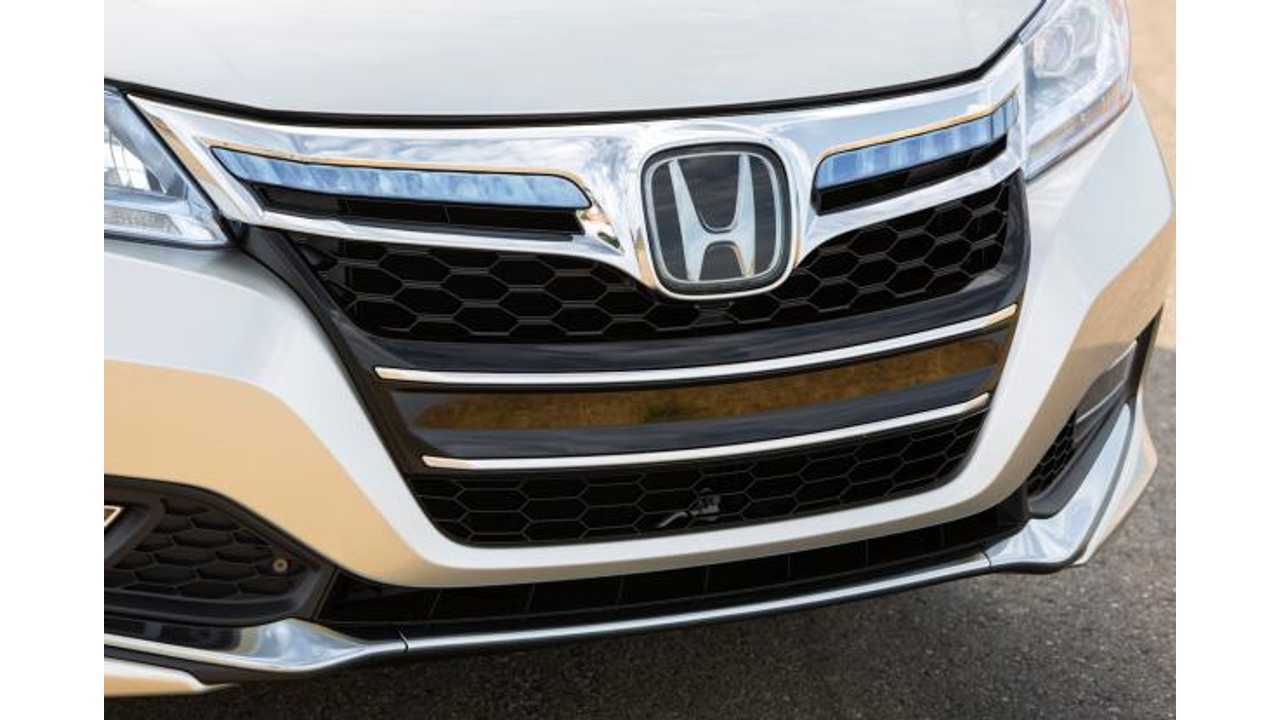 On October 31, the 2014 Honda Accord Hybrid will officially launch.

Honda Accord Plug-In Concept Vehicle (circa 2011)

So, in essence, Honda is saying Accord PHEV buyers should pay over $10,000 more for the ability to plug in.

Let's turn it over to Honda's own specs now, as this quickly shows you what you get for that extra $10,000:

The 2014 Honda Accord Plug-In Hybrid Electric Vehicle, rated by the EPA at 115 MPGe in all electric mode, making it the most fuel-efficient sedan in America, went on-sale at select New York and California Honda dealers on January 15 with an MSRP of $39,780 and a monthly lease price of $429.

Combining hybrid efficiency with a powerful dose of instantaneous electric-motor torque, the Honda Accord Plug-In is rated by the EPA with a maximum EV Mode driving range of 13 miles and a gasoline fuel-economy rating of 47/46/46 mpg (city/hwy/combined). The 2014 Accord Plug-In earned the highest EPA MPGe rating (115 MPGe) in its class, topping all plug-in-class competitors. In addition to being Honda 's first plug-in hybrid electric vehicle, the Accord Plug-In is the first production car in the U.S. to meet the new, more stringent LEV3/SULEV20 emissions standard, and will also qualify for single-occupant carpool-lane access in California.

Fuel prices can be scary, but the EPA-rated 50 mpg city 2014 Accord Hybrid will take some of the fright out of going to the gas pump when it debuts at U.S. dealers nationwide on Halloween (October 31). With a host of standard equipment, the manufacturer's suggested retail price (MSRP) ranges from $29,155 for the well-equipped Accord Hybrid to $34,905 for the luxurious Accord Hybrid Touring model, plus a destination and handling charge2 of $790.

With EPA fuel-economy ratings of 50 mpg city / 45 mpg highway / 47 mpg combined, the 2014 Accord Hybrid is the top rated 4-door sedan in America in the EPA city cycle. Highlighting both form and function, it blends the sophisticated exterior styling and spacious interior packaging of the Accord Sedan with a highly efficient two-motor hybrid system from Honda's Earth Dreams™ Technology advanced powertrain series.

Okay, so that extra $10,000 buys you a vehicle that gets 3 mpg less in the city, 1 mpg less combined and 1 mpg better on the highway.  The PHEV version gets a whopping (sarcasm intended) 13 miles of electric-only range and bragging rights to the title of the "most fuel-efficient sedan in America."

None of that's worth $10,000 though, so Honda is basically saying don't buy the plug-in version, it's too darn expensive.  Or something like that.