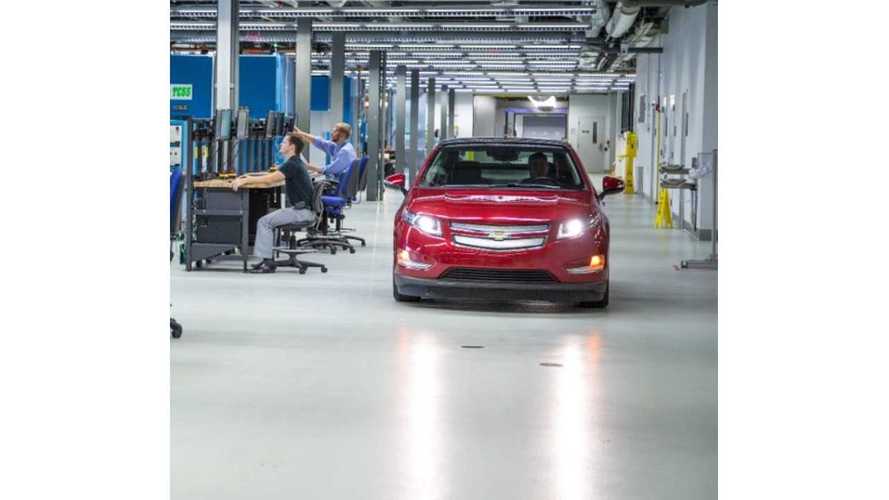 General Motors announced today that it has added 50,000 more square feet to its "Global Battery Systems Laboratory" in Warren, Michigan this year, bringing the total footage to over 85,000 feet.

Look Busy Fellas We Are Going To Take A Picture!

Since the facility opened in 2009, and the Chevy Volt came to market shortly thereafter, it has more than tripled in size.

The lab is responsible for testing and validating battery cells and packs for all of GM’s electric vehicles now and in the future. To date it has done work on the Chevrolet Volt, Cadillac ELR, Chevrolet Spark EV and also on General Motors’s eAssist light electrification system.

“In the past four years, the competitive landscape in the electrification space has grown exponentially. This has required us to raise our game and draw a new line in the sand,” said Doug Parks, GM vice president, global product programs. “To maintain our battery leadership, this additional real estate is filled with new capability that will help us improve speed to market for our next generation of battery systems and help us improve the value equation to our customers around the world.”

The additional capabilities of the lab expansion include:

The lab will also play a critical role in assuring GM’s current generation of electric vehicles maintain their battery leadership position. Teams will validate and test updates to existing chemistries and system designs to make the most of performance and reduce cost. For example, updates were made to the battery system in 2013 Chevrolet Volt that added three miles of EV range.

“GM is committed to vehicle electrification and our products in this area must continue to excite customers. A critical part of this plan is to deliver safe, reliable and affordable energy storage systems,” said Larry Nitz, GM’s executive director of global electrification engineering. “The new capabilities of this lab will enhance our engineers’ ability to design, develop, process and validate class-leading products to meet the needs of our growing customer base."

In addition to the lab in Michigan, GM also operates battery labs in Shanghai, China, and Mainz-Kastel, Germany, which are tasked with testing and validation of battery cells, packs, and advanced battery system development. Teams at the China, Germany and Michigan labs work collectively to test battery systems around the clock to reduce validation time.

Chevy Volt Battery Pack About To Take A Ride