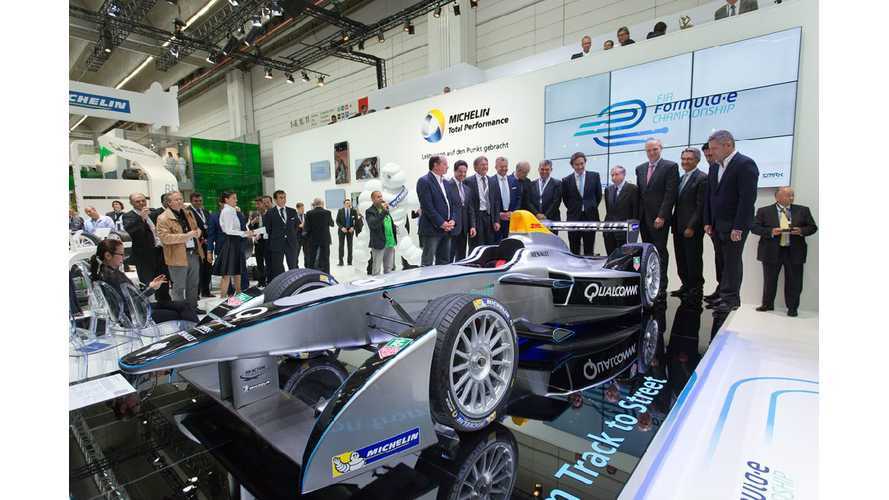 "The first Formula E Championship will be held from September 2014 to June 2015. The competition will be organized in ten legs, each one raced in the center of a major city in Europe (London, Berlin, Rome), Asia (Beijing, Bangkok, Putrajaya) or the Americas (Los Angeles, Miami, Rio de Janeiro, Buenos Aires)."

Base data from specifications indicate a maximum power of 200 kW, top speed of around 200 kph (124 mph) and 0-100 kph (0-62 mph) below 3 seconds. Weight minimum is 800 kg, of which 1/4 is the battery pack weight.  That pack is big enough to provide power for 20-25 minutes. Races will be almost an hour long so drivers must swap one Spark-Renault SRT_01E for another half way through.

"A total of 42 cars will be produced by Spark with each driver using two cars during the one hour races."

The racer was been designed and built in about 10 months by Spark Racing Technology to compete in the inaugural FIA Formula E Championship.

Eventually, teams probably will get the green light to build their own cars like in Formula 1.

The car’s monocoque chassis is made from carbon fiber and aluminum and was been constructed by Italian firm Dallara. McLaren Electronics Systems provides the electric motor, gearbox and electronics. Williams Advanced Engineering is responsible for the design and supply of the batteries and their battery management systems. Renault added systems integration, performance optimization and powertrain electrical safety and Michelin is the official tire provider.

It's worth noting that a single type of tire will be used in both wet and dry conditions to reduce overall costs and promote sustainability.

What is interesting is that Peter van Manen, Managing Director of McLaren Electronic Systems, says that the racer's motor was developed originally for the McLaren P1:

“These cars are going to be brilliant racing through the centres of cities. Electric motors deliver instant torque and acceleration and that is what McLaren is all about. Performance and efficiency. Our electric motor, developed originally for the McLaren P1™, has the highest power-to-weight ratio in the world. McLaren is proud to provide the performance behind Formula E.”

“I congratulate all partners involved in the production of the fully-electric SRT_01E car – it is a fantastic achievement. The innovative technology deployed follows the best environmental practices, highlighting the potential of the Formula E Championship to spark a revolution in the development of new electromobility systems, not just for motorsport but also for everyday use. This new championship builds on the FIA’s traditional role as a leading promoter of innovation, technology and performance in the automotive sector.”

“With Formula E being an open championship, the series gives manufacturers the opportunity to showcase their electrical energy innovations and we’re delighted to have Spark Racing Technology as the first, and for them to produce our new fully-electric Formula E car. Spark has enlisted the very best companies in motorsport to aid with its development, with Dallara, Renault, McLaren, Williams and Michelin all leaders in their respective fields and it’s an honour to welcome them here today. The Frankfurt Motor Show is also the perfect environment to reveal our new car. Many leading manufacturers at the Show today are unveiling their new electric road cars but not just one offs, full car ranges, demonstrating how times have changed and why the time is right to launch the new FIA Formula E Championship.”