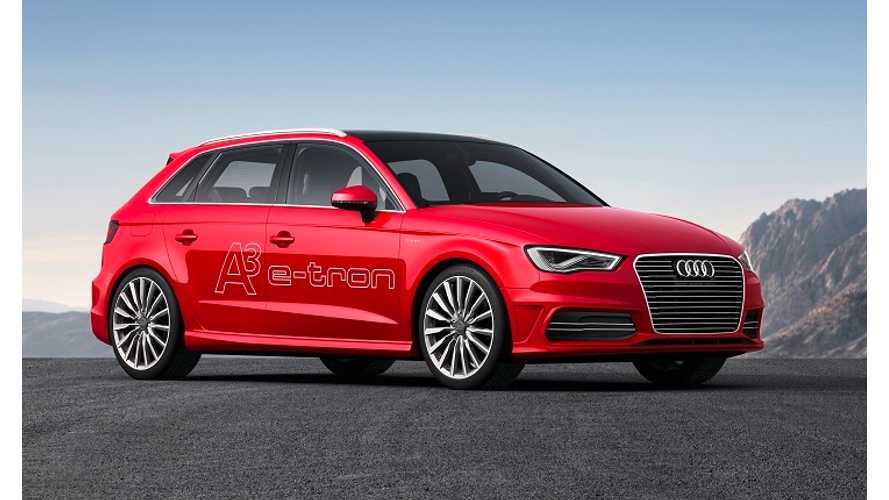 Rarely do we give any credit to Volkswagen/Audi when it comes to plug-in cars.

Most every offering from the company seems to either be out of touch with the market (see e-Up!) or priced way above it.  The Audi A3 Sportback e-tron fails at neither of those things.

Audi has set the price for the plug-in A3 at a very respectable 37,000 Euros in Germany, which dollar-for-dollar would translate to about $49,000, but in reality would equate to more like an upper 30K price-point for the US when it arrives here.

It is not Chevrolet Volt territory (starting from $34,995), but it is in the ballpark, and Audi as the upscale brand of VW is clearly intending to shoot for a demographic a little higher than the Chevy.  Audi should be able to sell a fair number of these in America.

As for when it arrives in the US, Audi is not yet saying, but notes the car is in series production now, and will debut in Europe in the spring - which is earlier than previously expected.

The extended range Audi has an all electric range of 50 km (31 miles) based on the NEDC scale - based on its 8.8 kWh battery, we estimate about 25 miles of range on the US EPA standard.

Besides featuring some fairly nice interior amenities over its VW counterpart, the 5-door car is rated at 150 kW (204 hp) with 258 lb-ft of system torque - so it is quite lively on the road

Audi released this statement with pricing:

Thanks to systematic lightweight design, the five-door car has an unladen weight of less than 1,580 kilograms (3,483.30 lb), including all electrical components, and it offers space for five occupants and plenty of luggage. It comes complete with all the brand’s strengths: elegant design, a sporty suspension, first-class ergonomics, top-notch build quality and an extensive selection of high-end assistance and infotainment systems.