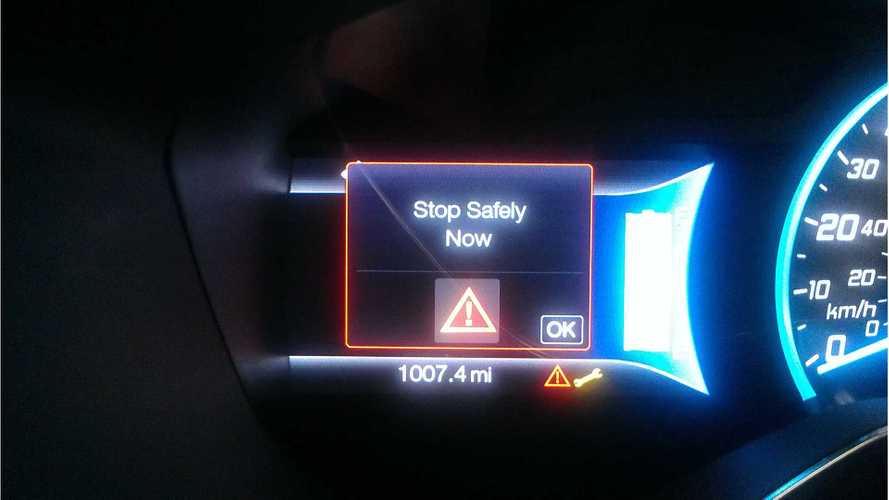 It has a problem we are all too well acquainted with - the "Stop Safely Now" warning on the Ford Focus Electric.

We first encountered this probem in October of 2012, when our own Marc Lee's 2013 Focus Electric decided it was done with being in motion and issued the warning.  Fortunately, Marc was not driving at the time.  However, even back then there were a couple reports of people who were driving when the car shutdown.

Ford had issued some statements on the issue, and had assured consumers its product was safe to drive.

But by June we had personally heard 7 or 8 stories on how the car had failed to perform in the real world, and filed this report which detailed an owner's story about the Focus Electric failing at a busy intersection with his family in the car.  The problem had not been resolved, it had gotten worse.

At the time, InsideEVs got in touch with Ford, and their rep Amanda Zusman addressed in thusly (while offering to send particular customer's concerns with their Focus Electric direct to Ford's Engineering team):

“In regard to your note, the Stop Safely Now warning appears in the Focus Electric in lieu of the Check Engine light that is found in naturally-aspirated vehicles. As with all vehicles, there are a number of different reasons why this warning may illuminate. If a customer’s Check Engine or Stop Safely Now light illuminates, they should contact their dealer.”

This Ford Focus Electric Seems To Operating As Intended

Now, the NHSTA is finally involved as they opened an investigation on the Focus Electric after they have received 12 complaints specific to the incident of propulsion failure.

The NHSTA notes an increasing trend of reports and a preliminary evaluation has been opened to "assess the scope, scope and safety consequences with the alleged defect."  The investigation includes all Focus Electrics sold, which the NHSTA estimates at around 1,000 (in reality 1,910 Focus Electrics have been sold in the US).  First official deliveries began in May of 2012.