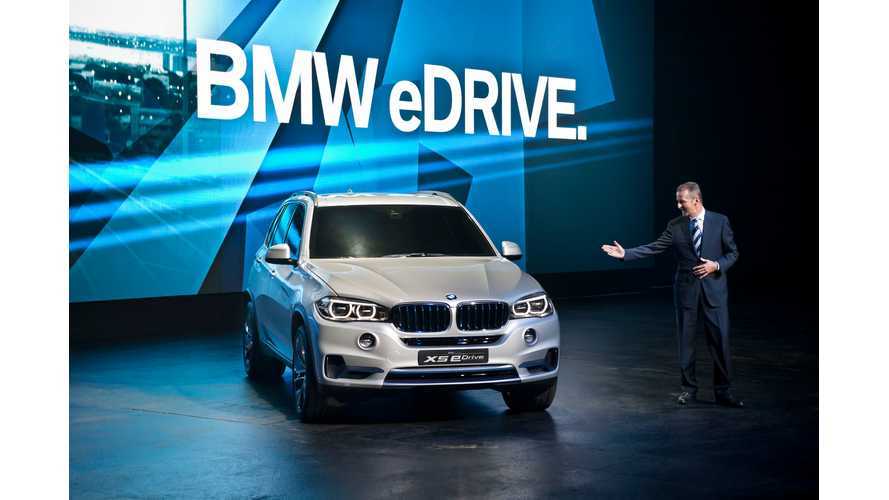 BMW will try to re-invent the sports activity vehicle category with its vision of the X5 of the future.

Dubbed the BMW Concept5 X5 eDrive, this SAV hit the stage in Frankfurt today for its grand debut.

BMW is not yet willing to say whether or not the X5 eDrive will head to production, but as we see it, it's ready to go right now and it'll soon head to the production halls of BMW.

The Concept5 has a listed fuel consumption rating of 3.8 liter per 100 kilometer (62 mpg US).  It features a 95-hp electric motor, a lithium-ion battery pack that provides up to 19 miles of electric-only range at speeds of up to 75 mph and is an all-wheel-drive SAV.

The ICE engine employed here is a 4-cylinder turbocharged gas-burner.  0 to 62 mph is accomplished in 7 seconds, with engine hp estimated at just over 180.

And of course, the Concept5 is a plug-in.  Otherwise it wouldn't be seen here.

What would you be willing to pay for the production version of this plug-in X5?

Here's what else BMW says of the Concept5:

BMW is also using the IAA 2013 to present a new way of further reducing the fuel consumption and emissions of an SAV. The BMW Concept X5 eDrive combines the familiar brand of driving pleasure provided by the intelligent all-wheel-drive system xDrive and a luxurious ambience with a plug-in hybrid drive concept that delivers familiar BMW sporting attributes, the ability to hit speeds of up to 120 km/h (75 mph) on electric power alone and average fuel consumption in the EU test cycle of 3.8 litres per 100 kilometres (74.3 mpg imp). The study car’s drive system comprises a four-cylinder BMW TwinPower Turbo combustion engine and a 70 kW/95 hp electric motor, likewise developed by the BMW Group.