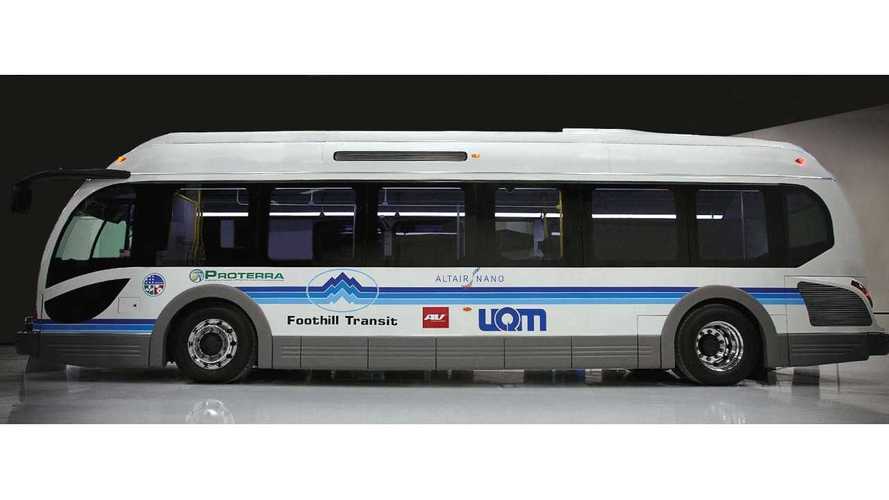 After announcing a significant expansion of production capacity, Proterra reveals that it has received its largest-ever U.S. order for electric buses.

12 quick-charging EcoRide BE35s will go to current Proterra customer Foothill Transit, as an addition to the few buses that it's been running from 2011:

"In 2011, Foothill Transit became the first transit agency in the United States to use on-route charge electric buses by purchasing and operating Proterra buses. Based on strong performance and return on investment of those vehicles, the agency has decided to purchase an additional 12 buses from Proterra to completely electrify its 291 route, which travels between LaVerne and Pomona."

And because Foothill Transit has a 314-bus fleet, this latest purchase means it will have at least a few percent of its fleet totally electrified.

"The Foothill Transit order is a clear vote of confidence and confirmation that Proterra buses truly deliver the lowest total cost of ownership and smallest carbon footprint of any transit bus on the market. Foothill Transit was our first customer and the first U.S. transit agency to go electric with on-route charging, so we are thrilled that they have seen the value of expanding their electric fleet and will use Proterra buses to do so."

This new wave of orders is the true reason for Proterra doubling its production workforce, installing a second production line, adding a second shift and growing its sales staff significantly.

Here is a preview video of the new Foothill Transit Ecoliner electric bus, debuting in 2010: