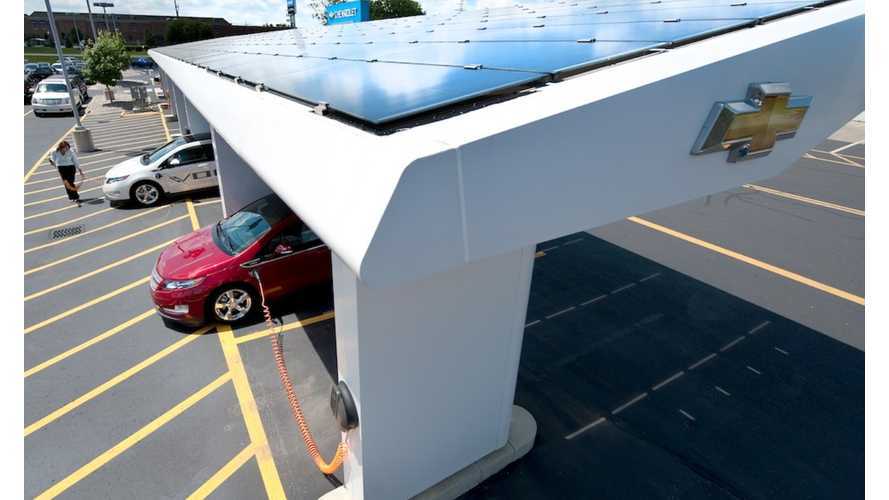 Best Of Both Worlds? Sunlogic's Solar Canopy That Can Produce Enough Solar Energy To Fully Charge 12 Volts Per Day

The past few years have brought on a panic from some utility companies as their business model changes. On one hand claims have been made on how electric vehicles could crash the grid. On the other hand, arguments have been made that renewable energies (particularly solar) will cause the utilities to lose revenues leading to their demise or forcing them to charge non-renewable users more money. Does anyone see a double standard?

Some utility companies and politicians would like to separate these two arguments, when in fact they will be waged as one. Studies have shown that one in three EV owners power their EV via solar with an increasing number considering the natural combination.

Given that these two new technologies go hand-in-hand, let us look at some EV facts. The 100,000th  US EV was sold in May of 2013. The year also produced 130,000 residential solar installations. Currently fourteen EV models are available to the US market.

They are as follows: Nissan Leaf, Chevy Volt and Spark, Ford Fusion, C-Max, and Focus, Honda Accord and Fit, Toyota Plug-in Prius and RAV4, Tesla Model S, Fiat 500E, Mitsubishi iMEV, and Smart ED. 2014 will add the BMW i3 and i8, Cadillac ELR, and Mitsubishi Outlander PHEV for a total of eighteen EVs.

The following years will have even more models entering the market as automakers rush to cash in on this evolving business sector.  Evidently, EVs are here to stay and their market share will continue to rise.

Some utility representatives and the politicians they’ve successfully lobbied have observed this rise in solar power and EVs with panic, worried that solar producers will detract from their revenue.  A more accurate assessment reveals how solar power and EVs are emerging together with the potential to benefit the grid.

The presence of millions of EVs plugged in will greatly benefit the efficient production and consumption of electricity.  Here’s how.

No Where Is The Combination Of Solar Charging And EVs More Prominent Than Japan. (Honda's solar charging station in Japan shown)

The average modern EV driver will start their day by driving to work on electricity between 6:00 and 9:00 AM. The ideal charging time will be between the hours of 10:00 AM and 3:00 PM to parallel future solar production hours, so solar power will offset this additional load on the grid. The EV will continue to charge and the solar panels will continue to add the balance even adding extra power during these hours.

The EV driver leaves work between 3:00 and 6:00PM. They plug in once again at home but do not start their charge until after peak hours ending around 9:00-10:00PM.  Now typically when power consumption drops around 10:00 PM the EV will add more revenue to the utility in a time sector that was previously low on consumption until the cycle starts over the next day.

Now here are some additional future possibilities. The EV could be programmed to start and stop its charge based on fluctuations in grid use thus better utilizing grid power. Take a moment to ponder what a huge benefit this would be for the power grid. Power is not used uniformly throughout the day. It fluctuates by the second and must be generated in such a manner to handle such fluctuations, thus adding to your cost of electricity. The future EV could provide a buffer to much of this problem by starting and stopping the charge in the future thus helping lower cost of electricity.

V2G Is Already A Reality In Japan. Here A Nissan LEAF, Through A Nichicon Charging Station Puts Stored Electricity Back Into The Grid

Future EVs could also provide peak power to the grid in what is referred to as V2G or Vehicle to Grid if the battery chemistry advances to handle the additional cycles.  Instead of just stopping usage, the EV could actually reduce peak loads by giving power back.  There are programs currently testing V2G capabilities. Though current battery cycles do not make this a desirable option to all EV drivers at this time, this could possibly change in a decade as battery chemistry advances.

Now a bit more about solar. Currently the most amicable relationship between solar providers and the utility companies is net metering. It is a basic concept where the power company buys and sells to solar generators at the same rate. This will always be the best practice for solar generators. That is of course unless utilities and politicians fight against this and other renewable credits. Also remember now that 1-in-3 EV drivers are also solar adopters. If adopters of both of these technologies are penalized then they will most likely have no desire to help the grid and use their EV, or old EV battery, or future solar storage devices for their solar arrays.

So now let us look at an alternate possible future model. In this alternate scenario, the solar/EV driver adds battery storage at home and stores the excess solar energy that would have been distributed to their neighbor. The drivers draw on the grid by day and do not offset with additional solar power, thus increasing the load on the grid. When the driver returns home, they use their stored power to charge their EV. The future grid does not benefit from buffering fluctuations.

The future grid does not benefit from peak load demands and utility companies do not gain future revenue from night time EV charging. This is not the best answer for solar/EV owners or the utility company or other electrical customers. The best answer will be the symbiotic relationship with the utility where solar generators benefit during the day by distributing excess power to their neighbors and utility companies benefit by night with additional revenues, power buffering and probable peak load offsets.

So when someone tells you they need to charge you more for the solar revenue lost by day ask them about the extra EV revenue generated by night.  The point being that these two technologies ultimately go together to form a portion of the new energy model. Some progressive utility companies already offer net metering and have the wisdom to see this dual evolving business model.  Let us hope that this trend continues.