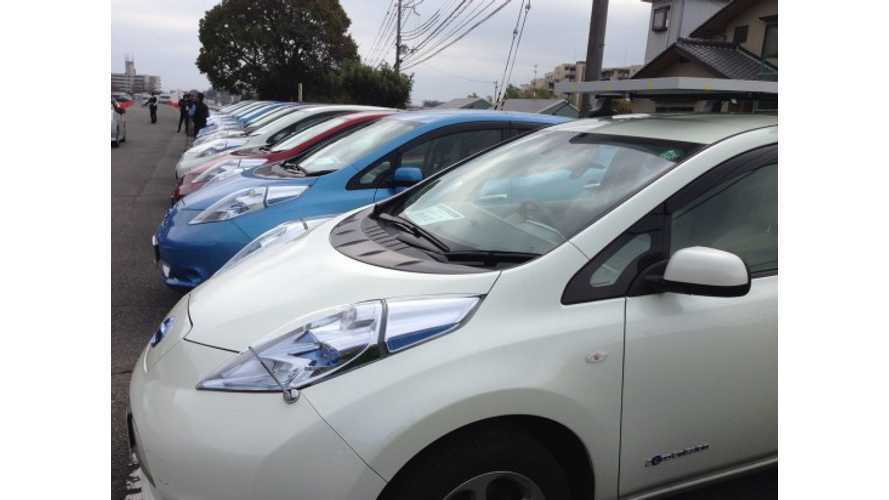 Nissan Gets Into The Business Of Selling ZEV Credits

In order to be able to sell traditional cars and trucks in California (and 14 other states following CARB standards) free from EV compliance fees, very large automakers have a minimum threshold of all-electric vehicles to sell each year.  After 2014 the net widens to more manufacturers and the minimum level of compliance rises.

Fortunately (or unfortunately depending on your prospective) these minimum levels are expressed by the accumulation of ZEV, or Zero Emission Vehicle credits - a tangible thing that can be traded and sold between automakers

Outside of Nissan, Tesla has been the only automaker with an excess of these (given they only make electric vehicles), and have been selling them to other carmakers (most notably Honda) that require 'help' in meeting CARB compliance.  In fact, all of Tesla's profit in 2013 ($41+ million - ex-items) can be attributed to selling green credits.

Now Nissan is in the game.  And unlike any other major OEM, they have credits to burn in a big way.

Only needing a few thousand LEAFs sold (@ 3 ZEV credits a pop) to comply with base regulation by the end of 2014, Nissan has now sold 29,212 all-electric LEAFs to date in the US, more than 2/3rds in compliance states.

So, while the other major automakers are struggling to come up with generating just the few thousand credits to comply, Nissan is knocking that number out monthly with the new 2013 LEAF,  which now consistently sells 2,000+ units per month.

Nissan's decision to now sell credits is bad news for Tesla (and probably the EV industry in general), and the drop in Tesla's green revenue can already be seen in the California company's quarterly results.

CEO Elon Musk has noted that future green credit revenue will "decline significantly in future quarters," as half of future Model S production heads outside the US, and as more downward pressure is applied to the value of the credits over time.

While both Tesla and Nissan are now selling credits, they are both looking at the transaction from completely different angles, and are selling those credits for different reasons.

Tesla would like to see the credit continue to stay high in value and to help their bottom line, whereas Nissan may actually be led to sell the credits in the future at a discount - not caring at all about the money, but the greater effect of selling those credits has on the industry in general.

As of now, Nissan can fund the ZEV credit demand for the entire industry, so if Nissan offers the credits to their potential competitors (the likes of Honda, Toyota, Ford, Chrysler, etc.) at a discount, they essentially put an incentive out to the other automakers to NOT make electric vehicles that they DON'T WANT to build.

Essentially, any automaker Nissan does sell their credits to, will NOT  be competing with the Japanese company's electric vehicle offerings in any meaningful way - or at the very least, the easy availability of credits would curtail the other OEMs from selling their EVs cheaper/at a loss to make their numbers and eroding the perceived value of EVs to the general public, if they (other OEMs) know Nissan has credits on the table and ready to go.

Nissan did not disclose the amount of credits they had already sold, or to whom.