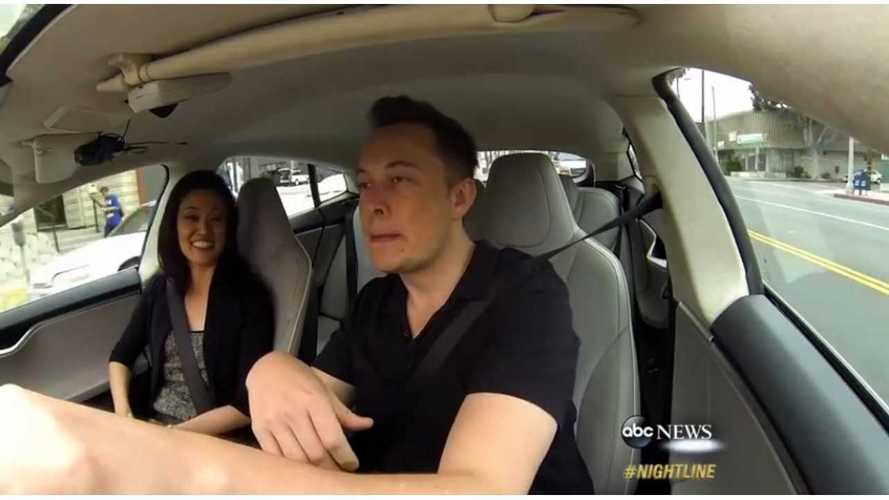 While driving a Model S, Tesla CEO Elon Musk made his first ever stop at a conventional dealership (an Acura showroom in California) and says that customers are treated like prey under that selling model, whereas at a Tesla boutique outlet, employees make no commissions and exert no pressure on customers according to Musk.

How Mr. Musk ended up darkening the door of a competitor's showroom happened quite unexpectedly during an interview with Nightline reporter Betty Liu while driving around in a Model S.  Here is how the exchange went down (starting at the 3:00 mark in the video below):

Liu: "Have ever driven into any of these (conventional) dealerships just to see what they think about the Model S?"

Musk: Shrugs shoulders, "We could do it right now if you want."

At this point, the Nightline reporter is fairly excited at the prospect of getting Musk in a high pressure situation, while meanwhile we are sure that the Tesla CEO's handlers heads are exploding somewhere in the chase car as he pulls in front of an Acura dealership in Santa Monica.  (Whats the Wolf's phone number again? - language NSFW)

While standing on the Acura lot, Musk says that the dealership experience "...isn't particularly inviting, it is usually a fairly high pressure situation," while noting that customers are never really sure if they are getting a good deal or not.  While noting the customer is uneasy there.

"You feel a little bit like you're prey....and you're going to get pounced on and it's not very pleasant"

Amazingly, Liu then convinces Musk to enter the dealership and engage the Acura employees there about their selling practises and his Model S!

However, by this time Elon's handlers have fully recovered from their earlier seizures and quickly pull him out of the situation.  We imagine they were thinking about the welfare of Tesla's relationship with Honda, and selling them future ZEV credits.  (Acura is Honda's luxury division)

The second half of the video (from 4:00) is also fairly interestin; as Bill Wolters - President of the Texas Dealers Association, can barely hold in his glee for stopping the Tesla 'boutique store train' in his home state.

"(laughs) He (Musk) typically is not somebody whose been told no very much."

From there Mr. Wolters takes Liu on his own tour of a Chevy store in Austin Texas to illustrate it is not as bad as the Tesla CEO has made it out to be, and explains his point of view from there - check out the entire video (below) for the full story.