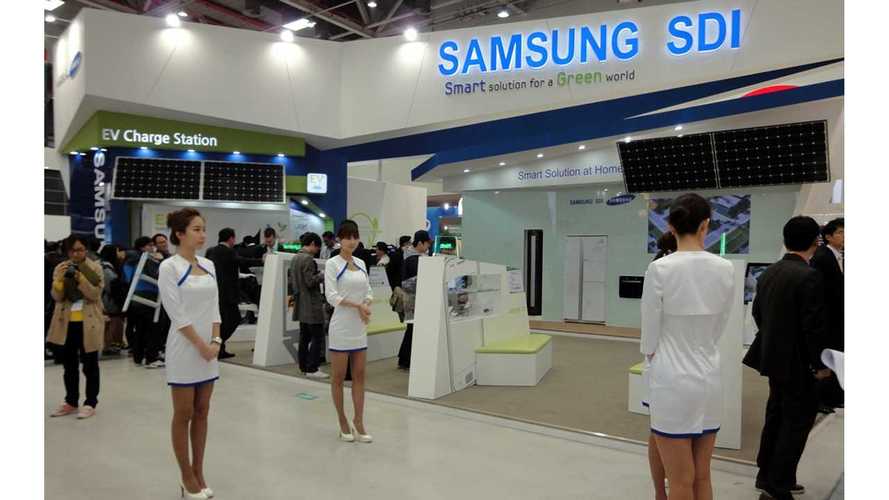 According to The Korea Herald, Samsung SDI is in the final stages of inking a lithium-ion battery supply deal with Tesla Motors.

Before even thinking that this spells the end of the long-standing deal between Tesla and Panasonic, we'll say this: Tesla needs additional cells, which Panasonic can't supply at the moment.  Samsung SDI will likely step in to fill that shortfall.  Tesla will still work mainly with Panasonic for the time being.

The Korea Herald quotes a "source close to the matter" as saying this:

"We understand SDI and Tesla are undergoing last-minute tests before the Korean company starts to supply its batteries."

Those last-minute tests reportedly include a battery-life analysis conducted by Samsung SDI and safety tests to be done with both Samsung and Tesla present.

Sources says that the Samsung SDI cells will make their way into the Tesla Model S and maybe even the Model X.  Those cells could show up immediately, as Tesla is said to be running dangerously low on supply from Panasonic.

For what it's worth, Panasonic is racing to catch up, but Panasonic won't have its additional supply lines open until mid-2014.

The addition of both Samsung SDI and BYD will ensure that there are no supply disruptions for future Tesla vehicles.

Of note, reports say Tesla looked at both Samsung SDI and LG Chem in Korea.  In the end, Samsung came out victorious.  Why so much interest in inking a supply deal with Tesla?  Well, as The Korea Herald quotes one more "industrial source who declined to be identified:"

Samsung SDI would not officially comment on its possible dealings with Tesla.

Samsung SDI is the supplier of record for the BMW i3 and Fiat 500e.

Is This the Samsung Cell Tesla Will Use?