Top 15 Nissan LEAF Markets In US - Now Best Seller For The Brand In Seattle, Portland and San Francisco 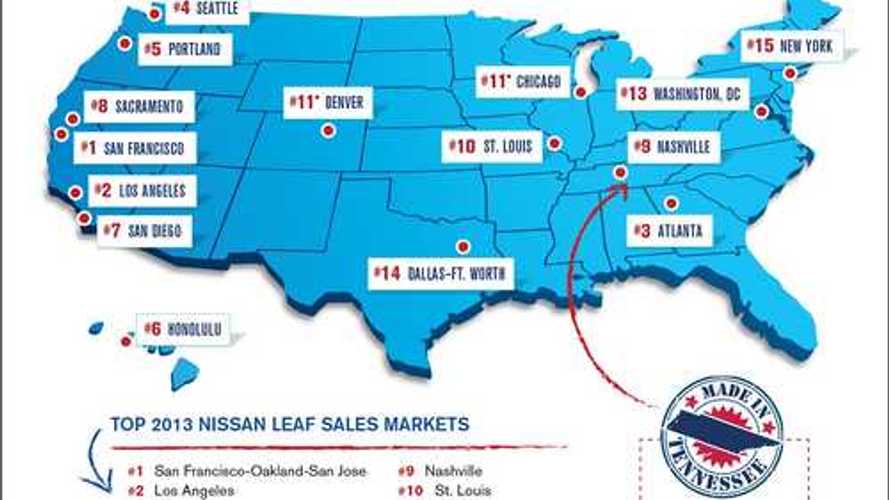 About a month ago we published a piece on the "top 10 markets" in the United States for the Nissan LEAF, which was fairly West Coast heavy.

Now Nissan, has gone one better - or rather five better - with a newly updated list of "top 15" markets that shows that the rest of the nation is also on board with plug-in vehicles, as many of the new dots have extended east.

Inside the "top ten" list, the only change has been that Nashville has dropped from the number 8 spot to 9th, having been passed by Sacramento.

Erik Gottfried, Nissan's  director of EV Sales and Marketing notes that the LEAF is actually now the best seller for the brand in Seattle, Portland and San Francisco, while adding that confidence is still high in the 75 mile EV:

"Given the sustained demand we've been seeing among increasingly diverse markets and buyers, we're bullish on the EV market and confident that LEAF will continue to be the leader in practical, affordable EVs"

Nissan LEAF Outsells All Other Nissan Vehicles In Seattle, Portland And San Francisco

Nissan has also provided a little 'blow-by-blow' update of each of the areas:

Denver's $6,000 Tax Credit Goes a Long Way To "Popularizing" The LEAF With Residents

Helping to popularize LEAF in the greater Denver market is Colorado's $6,000 state tax credit, EV enthusiast dealers who sponsor considerable grassroots education and awareness activities and a general green-mindedness in the market. "Colorado has a green outdoorsy streak and a vibe that embraces EV culture," said Gottfried. "In an area known for great craft breweries, employees from New Belgium Brewing even drive LEAF to make their sales calls around town. The company offers free public access to its charging stations, which are cleverly concealed in 1970s-era gas pumps. That sort of EV-friendly environment improves visibility."