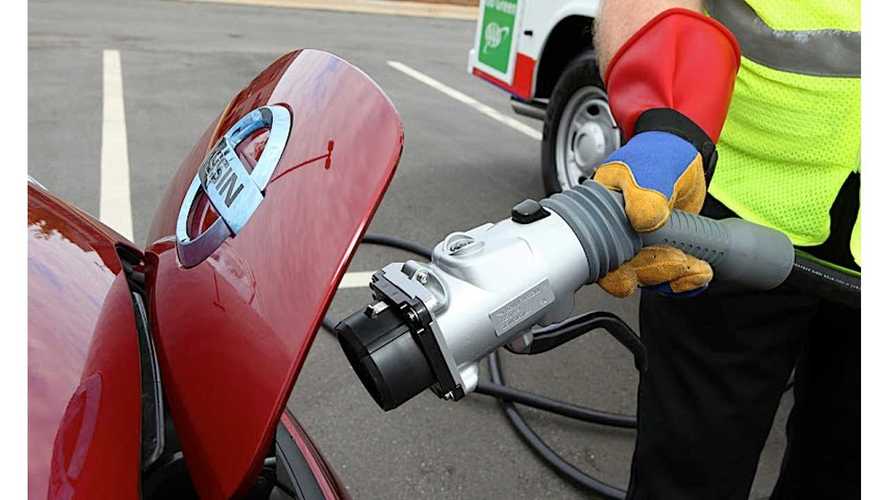 2013 LEAF Stops For A Quick Charge

GM, BMW, And Apparently Europe Would Like You To Choose This Option For Your Next Fast Charging EV Purchase

Fiona Hall basically told us that CHAdeMO termination is not the case.

"Direct Current (DC) fast recharging points for electric vehicles may be alternatively equipped with connectors of Type “CHAdeMO” for a transitional period ending on 31 December 2018.”

Following a meeting with representatives from Nissan and ZeroCarbonFutures, the leader of the Liberal Democrats in the European Parliament, Fiona Hall MEP, has quashed industry rumours that the CHAdeMO quick chargers widely installed across the UK and Europe will be banned under draft European legislation.

North East Euro MP Fiona, who sits on the Industry Committee in the European Parliament, said: "CHAdeMO quick chargers are not going to be banned.

"The draft legislation proposes the introduction of a new, additional quick charger called Combo although there a currently no Combo chargers or Combo-compatible cars on the road.

"I will be working to make sure that the legal text states clearly that CHAdeMO chargers will continue in use and that the new regulations from 2018 are all about introducing multi-standard chargers so that all types of electric vehicles are catered for.

"These multi-standard chargers are currently being installed under the TEN-T project by a consortium of Nissan, BMW, ESB, Renault and VW. This is exactly the joint technological approach which is needed to give all users of electric vehicles the access to quick chargers they need."

Of course, nobody ever stated that the already installed chargers will be shut off, only that after 2018, it could be a problem to add new CHAdeMO units with all consequences working in favor of non-CHAdeMO supporters.

If CHAdeMO connectors will be legal only in the universal multi-connector fast chargers, then this will force automakers such as Nissan to install the multi-standard chargers just to get more CHAdeMO-capable units deployed.

Or, if we look at it in a different way, what if BMW and VW were forced to install CHAdeMO in their multi-connector fast chargers?