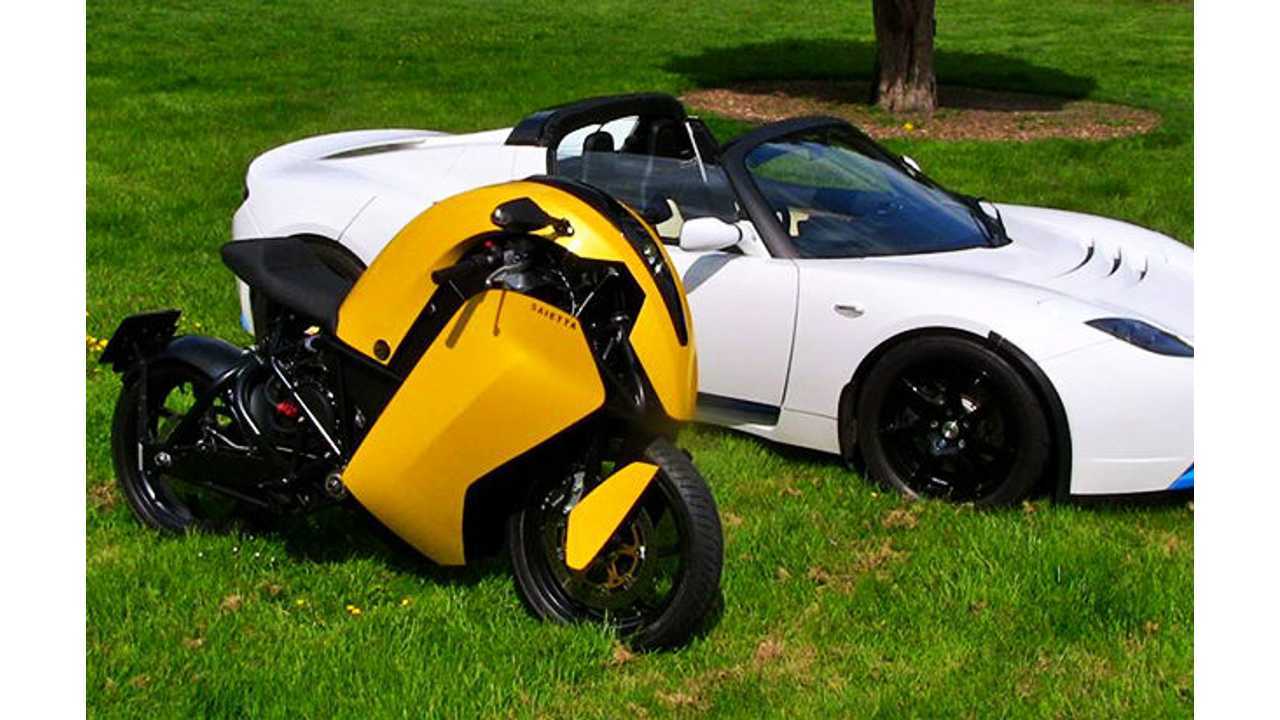 Agility says that design and engineering of the Saietta R took 7,000 hours, but it has finally made it into production in London.

Mark Northwood - an avid motorcycle rider and one of the first Tesla Roadster owners in the UK - took delivery of first production unit of Saietta R. Mark seems to be thrilled with his latest EV, stating:

"The sensation is surreal: most bikes make a feature of the exhaust note and there is lots of vibration and heat from between your knees. The Saietta R is quiet, calm and cool (literally) while delivering an uninterrupted surge from zero to the speed limit."

Below is attached the full press release with Mark's story and an interesting Q&A about Saietta R.

Financier, an avid motorcycle rider, one of the first Tesla Roadster owners in the UK and the first Saietta R owner in the world to receive production Saietta R

We cordially invite you to meet the first Saietta R owner and Saietta R Fleet Leader Club* member in the world. Here is Mark’s story of discovering Saietta R and a Q&A session that he has so kindly agreed to share with us.

“I have ridden my BMW F800ST, which I am now selling, and the Saietta R back to back over the past 2 days and it is a very revealing comparison. I rate the BMW but the acceleration just feels sluggish now, and for the city the Saietta R leaves it, and everything else, standing.”

“The sensation is surreal: most bikes make a feature of the exhaust note and there is lots of vibration and heat from between your knees. The Saietta R is quiet, calm and cool (literally) while delivering an uninterrupted surge from zero to the speed limit.”

I first saw the Saietta R in the Esquire Speed magazine. At the time I was in hospital, staring at grey walls so the sight of those exotic curves were spellbinding. So much so that I joked on the Tesla forum that my dream garage would have a Saietta R alongside my Roadster. I contacted Agility via the website requesting a test ride and waited. A couple of months later I got a call: first an apology that the company was flat out bringing the bike to production and dealing with media interest, but then the good bit: as a bike rider with proper EV experience I would have a unique perspective on the Saietta R so would I like a test ride? Woo hoo..! The test ride was confined to streets in North London but in many ways this is the perfect habitat for this new breed of bike: controls are simple, balance is easy because of centred weight distribution and the go is instant. The only distraction is the heads turning to take in the spectacular shape zipping by. I was hooked, and when Agility called to offer me the opportunity to become one of their “Fleet Leaders” I had to find a way to accept. I began working life as an engineer, so I was especially keen to support this local firm of talented and motivated professionals, who were busy turning ambitious dreams into polished reality. As a Fleet Leader I would get the first production bike and assist with the final stages of proving the set up, and the odd component prior to full production. An incredible opportunity.

The team have handled the process with professional attentiveness and now I am fortunate enough to be riding the first customer Saietta R in the world. Within a couple of weeks my feedback has led to revised final drive gearing and a new throttle profile to suit my particular preference and style. The bike is very flexible in how it can be set up, with the advantage of electronics controlling so much of the drive train. With Summer here at last I am looking forward to building my relationship with the Saietta R.

*Saietta R Fleet Leader Club is an invitation only Saietta R owners club bringing together the first Saietta R owners. The principle of the club is to provide a rare opportunity for exceptional Saietta R enthusiasts to be the first owners in the world to receive the production Saietta R as well as take part in the Saietta R launch and continuous development.

1. HOW DOES SAIETTA R COMPARE WITH OTHER BIKES YOU HAVE RIDDEN?

It is easier to ride than everything other than a twist and go scooter, but it has the instant response of a mid-sized road bike (I have had a BMW F800ST and a Kawasaki ER6).

2. HOW DOES RIDING AN ELECTRIC BIKE DIFFER FROM A CONVENTIONAL COMBUSTION ENGINE BIKE?

The sensation is surreal: most bikes make a feature of the exhaust note and there is lots of vibration and heat from between your knees. The Saietta R is quiet, calm and cool (literally) while delivering an uninterrupted surge from zero to the speed limit. I am also very aware of just how much IC bike engines pollute when sitting behind them at traffic lights and when they accelerate away. The bikes behind me are breathing fresh air. In hot weather the lack of heat from the engine is a big advantage when in traffic.

3. WOULD YOU GO BACK TO RIDING A TRADITIONAL BIKE AFTER SAIETTA R AND WHY?

Not for day to day rides. For a tour around Britain or to Europe I would consider a traditional bike if the journey was more urgency than pleasure, but planning a more leisurely route around recharging stops might appeal there too.

4. HOW MUCH MONEY DO YOU THINK YOU HAVE SAVED USING ELECTRICITY OVER PETROL?

The running costs are very low. No fuel, oil, plugs, bearings, exhaust. It is early days, and I have only covered around 800 miles, but my commute averaged around £8 per day in fuel which is replaced with around 50p in electricity, half of which is free on the Source London charge point.

5. IS THE LACK OF SOUND AN ADVANTAGE OR HINDRANCE?

It means I can hear everything around me, which helps a lot. Wind noise in the helmet becomes the primary sound at speed. Some say that bikes are safer if you can hear them but many bikes are quiet at city speeds and the horn is there to alert drivers if necessary. Pedestrians should also be given plenty or leeway as many are distracted or have earphones on so wouldn't hear a bike anyway.

6. DO YOU FIND YOU GET A LOT MORE ATTENTION WHEN OUT RIDING?

Yes. The Saietta R is a striking design, especially in vivid yellow, so I get plenty of interest from other riders and drivers alike.

7. DO YOU FIND THERE ARE ENOUGH CHARGING STATIONS WHERE YOU RIDE?

So far, yes. The UK is well behind the US and parts of Europe but a friendly camp site or cafe near a car park is usually available when official charge points are not. People can be remarkably dishonest with themselves when they think about how far they really ride without a break.

Weekdays it is 32 miles, 20 of which is dual carriageway and motorway and the rest is stop start through the outskirts of London into the congestion zone, taking 50 minutes or so each way. Weekends can be a 10 mile trip to visit family on fast A roads, or a 1 hour blast through local B roads.

Agility is a dynamic young company with an exceptional talented and motivated team working on the Saietta R. I am immensely excited to be involved with this project and the team have been responsive to my suggestions and professional in their dealings at every step of the way so far. The Saietta R is a beautifully engineered city sports bike which will continue to evolve with each new advance made by the team.