BMW i8 Confirmed to be Quicker Than M3: BMW Leaks Out More Details and Images (w/HD video) 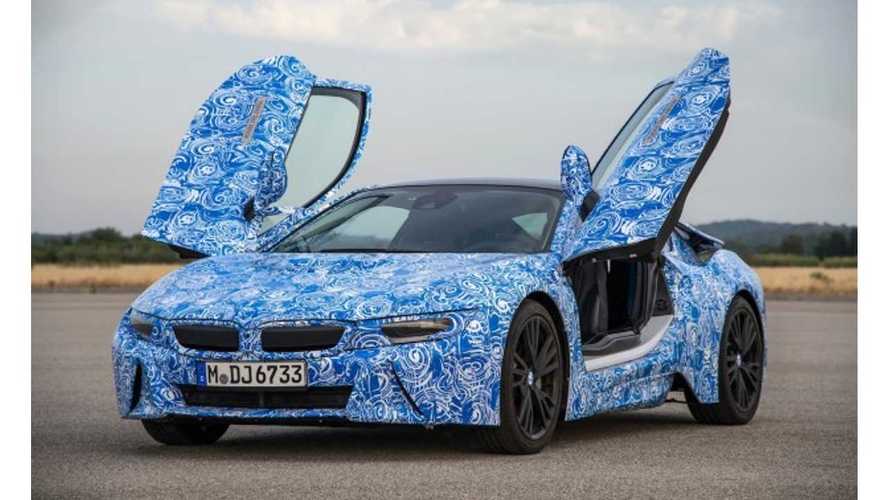 Now that the BMW i3 has been fully revealed, it's time for BMW to focus on its flagship plug-in vehicle: the i8.

We know that the i8 will make its worldwide debut in full production form at the Frankfurt Motor Show in September, but there's more that's been confirmed by BMW now.

BMW slung its i8 out onto its Miramas track in France to show off what it's packing.  According to the automaker, the i8's three-cylinder TwinPower Turbo engine now puts out a confirmed 231 hp, all of which are sent to the rear wheels.  The i8's electric motor power the fronts with 131 hp.  Combined torque is 420 pound-feet.

With that amount of grunt on board, the i8 can zip from 0 to 60 mph in less than 4.5 seconds, which turns out to be at least a tenth or two quicker than the current M3.  Top speed is listed at 155 mph and the i8 can hit 75 mph under electric power alone.

Electric-only range is listed at 22 miles, but that won't be the figure we find on the window sticker when the i8 gets rated by the EPA.

Deeper Look Into the Inner Workings

BMW states that the i8 delivers the equivalent of 113 mpg, while emitting under 59 grams of CO2 per kilometer.

Much like the i3, the i8 features a carbon-fiber-reinforced plastic (CFRP) cell and BMW’s aluminum "Drive" module.  It's a purpose-built plug-in vehicle, just like the i3.

20-inch alloys and a 6-speed automatic transmission (complete with a 2-stage auto gearbox for the electric motor) completes the running gear.  A "Sport" mode allows for manual control of the gear changes.

BMW says that the i8 can recharge from a standard 240-volt supply in under three hours, but adds that the optional "i Wallbox" fast charger will cut that time down to less than 2 hours.

Comfort and Eco Pro modes will be user-selectable.  In Comfort, the i8 will offer a total driving range of up to 310 miles.  Eco Pro extends that figures by roughly 20 %.

We expect to have more details on the i8 after it debuts in Frankfurt on September 10-11.  Hope you can hold tight until then.

Oh, the i8 has a 0.26 cd.  Check out this high-definition aero video showing how BMW manages airflow in the i8.