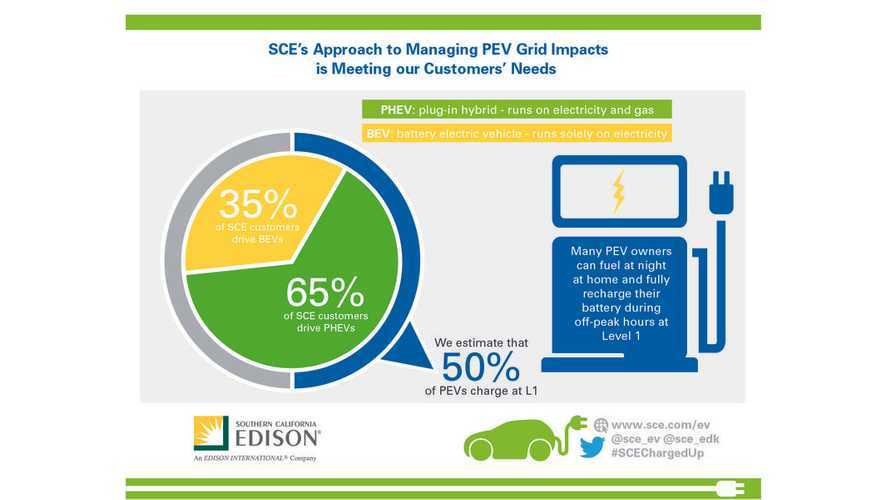 Southern California Edison (SCE) claims to serve up electricity to customers who "lease or own more than 12,000 plug-in electric vehicles (PEVs), both battery electric (BEVs, for about 35%) and plug-in hybrids (PHEVs, for about 65%)," according to Green Car Congress.

Basically, this means that SCE serves around 10% of all the plug-in vehicles sold in the US.  We're guessing this makes SCE the largest plug-in vehicle electricity provider in the US, but don't quote us on that one.

Regardless, SCE knows more than a thing or two when it comes to plug-in vehicles, owner charging habits and the impact of electrics on the grid.

SCE recently released a white paper titled, "Charged Up: Southern California Edison’s Key Learnings about Electric Vehicles, Our Customers and Grid Reliability" and in it there's a wealth of information.

Below, we'll highlight some of the key points, as outlined by Green Car Congress:

The only grid issue that SCE sees in the future is from the potential impact of multiple upcoming BEVs with 6.6 kW or higher on-board chargers.  SCE will monitor this situation to see how it impacts the grid.

SCE further says that anyone who may buy an electric vehicle soon should first contact their utility company, so that the utility can ensure adequate power distribution in your area.

Lastly, Ed Kjaer, an author of he SCE white paper, says this:

"A residential circuit handles something like 7-10 homes; adding a plug-in is like adding an extra home to the circuit. We’re finding a very low incidence of infrastructure upgrade required because of plug-ins. There is nothing like doing upfront preparation to ensure that things go according to plan. When we anticipated the cars were coming, we did a huge amount of work analyzing the circuits, and anticipated where we’d see clustering of the vehicles. We incorporated the load analysis into our overal daily infrastructure actions. We’ve got a very good handle on the increased load from transportation—that’s just being incorporated into daily activities as we upgrade the system. We obviously have a very good handle on the characteristics of those vehicles."