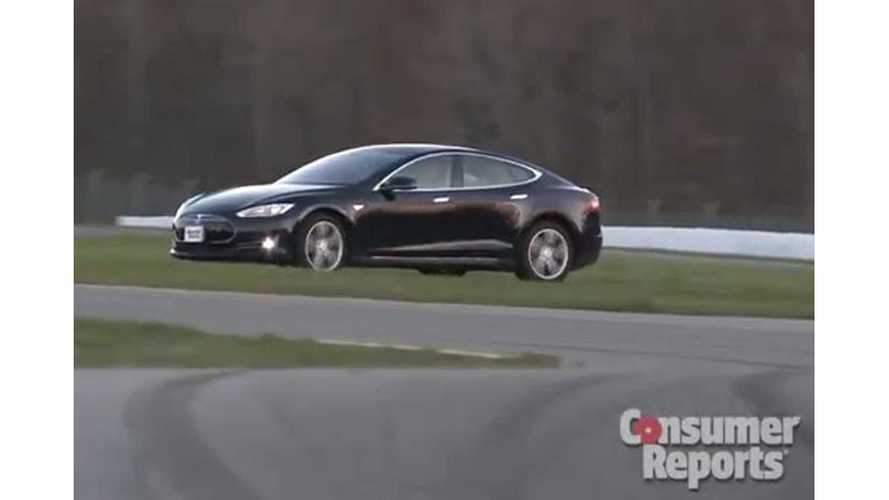 "We have been itching to take our Tesla Model S on a long trip, and the opportunity finally arrived when it became our Washington, D.C., office’s turn to experience the car."

"Last time we brought a car down for the Consumer’s Union advocates to experience green-car living, we had to trailer our Nissan LEAF. This time was much different: we simply drove."

Those are the words of Consumer Reports and what we see here is that the ultimate difference between the Tesla Model S and Nissan LEAF can be conveyed in one word: range.

We're not saying that the LEAF and Model S are even remotely similar.  Surely they are not.  But one can road trip, the other can't...Or at least isn't designed to.

"The Tesla, with its 200-plus mile range and (so-far small) network of Supercharger DC fast-charge stations along highways is the first electric capable of making such a trip. And, to be honest, we’d been skeptical of reports of other media having trouble making the trip between the necessary Supercharger stops, so we wanted to try it ourselves."

And try he did.

Eric Evarts of Consumer Reports was the man behind the wheel of the Model S for this road trip.  It's a bit tricky to describe the trip accurately, so allow us to now turn it over to Evarts:

"Even as capable as the Tesla is, making such a long trip—285 miles—requires more planning and preparation than driving a "normal" car. For starters, there’s covering that extra 85 miles. As I was combining the delivery trip with a visit to the Insurance Institute for Highway Safety, I had a 2 p.m. deadline to arrive in Washington. To accomplish this goal, I had to arrive at Tesla’s Newark, Del., Supercharger station early enough to allow replenishing the battery pack and complete the trip."

"The problem is that Supercharger is 192 miles from my house. A full charge in our Tesla Model S lately has been showing about 232 miles. That doesn’t sound like a problem in theory, but I know from driving it that I usually go through an additional 20 percent as I’m driving the car at highway speeds, whether its from going over hills, running the air conditioner, or just keeping up with traffic. Adding 20 percent to the 192 mile trip put me right at 230 miles, which felt way too close for comfort with my deadline. I could try setting the cruise control at 60 mph and staying in the right lane for the whole trip, but even that didn’t seem like it would guarantee I’d make it."

"Fortunately, Tesla recently opened another Supercharger station about 30 miles from my house, in Darien, Conn. So I planned to drive to Darien and charge up, even though I’d still have a good 200 miles showing on the battery and it would take me on a circuitous route using New York City’s Cross Bronx Expressway—not my preference."

"Another problem is that DC fast chargers only work at maximum speed when the battery is below about ¾ full. So I didn’t know how long it would really take me to replenish the 30 miles I’d driven to get to Darien, or how long I’d need to charge in Delaware. So I started my adventure at 5 a.m. to give me enough time."

"The drive to Darien took about 20 miles of range and got me 23 miles closer to Washington. Charging back up took 13 minutes – just long enough to grab breakfast."

Full battery...Check.  It's time to truly hit the road.

The rest of the trip was uneventful with Evarts arriving in Delaware with 47 miles left in reserve.  Evarts hit up the Supercharger there and gobbled down enough juice to add 185 more miles of range in 70 minutes.  He then headed to D.C. to complete the journey without incident.

Here's how Evarts sums up the the Model S road trip:

"When driving an electric car, top up the charge at every reasonable opportunity –they don’t come along often. Should something unexpected occur, like traffic congestion or a construction detour, you don’t want to stress over being stranded. And leave early to allow extra time for charging, although perhaps not as early as I left."

"Electric-car travel is getting easier. It is hard to believe that just a couple years ago we towed the LEAF, and now the only practical inconvenience is that we had to pause a couple times on our trip, as we would anyhow for meals and a pit stop."

"As long as your travel takes you along the right routes, it’s about as easy as a gas car—and a lot cheaper!"

So, plan ahead...drive...and enjoy.  It's now that simple, at least it is when you're behind the wheel of a Model S.