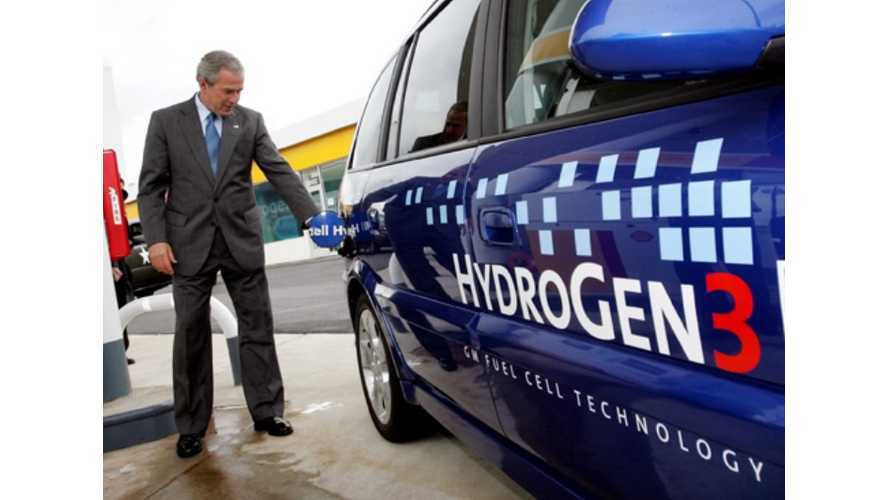 Tesla - Enough Sway To Now Be Listed On The NASDAQ 100

I remember 10 years ago in 2003, George W. Bush was making a speech on television.  He was pushing his agenda for fuel cell vehicles and he made a statement that these advances mean that a child born that day could be driving a fuel cell vehicle as their first car.

I looked over at my baby girl who was just weeks old, and this really meant something.  We had already gone through the birth and death of the electric car.  And since battery range was still an issue with electric cars at that time, I had high hopes that hydrogen would solve all of our problems: Oil addiction, air pollution, global warming, national security, etc.  But most of all, I just couldn't wait to leave gasoline behind because it seems so low-tech.

As the years went buy and I began to read more and more about the fuel cell technology, I began to lose faith in it.  Not only faith in Bush's forecast, but in the technology itself.  But there was something else bothering me, something deeper.

Watching the new generation of electric vehicles emerge, one lesson learned is that green doesn't sell very well.  Its hard to get people to buy something totally different and out of their comfort zone just so that a person can be "green."  I've come to realize that, while a certain percentage of people will buy something like that, most will not.

Toyota sells a lot of Prii with the green message, but I think honestly they are selling those cars despite the ads, not because of them. The Prius is a decently priced car that will save a lot of people money on gas.  Everyone I know that owns a Prius has bought it with the specific goal of saving money at the pump.

So that raises the question.  If you can't sell a fuel-cell vehicle based on its "green credentials" then what benefit does it have to the consumer? With most electric or plug-in hybrids on the road right now, the fact that electricity is so much cheaper plays a big role in the purchasing decision. Just like with the Prius, it gives consumers a real reason to make the switch.

Does The Tesla Model S Displace The Fuel Cell Movement?

A Tesla Model S Gets A Battery Swap

So there we have it.  The Tesla Model-S wins or at least ties in every category.  While some people will point out that the fuel cell technology will eventually get cheaper, my response to that is this - They've been saying that for 30 years. And the battery technology will also get cheaper and we've seen this first hand over the last few years.  Within a few years Tesla will have a cheaper vehicle on the road for half the cost of a Model-S.  Will fuel cells ever catch up with that?

There really is no advantage to a fuel cell car over an electric car that I can see, whether you fall into the category of being a treehugger, or maybe a geek that likes high tech cars, or the person who doesn't want to buy middle eastern oil, or just the guy who likes to save money at the pump.  And this is why I say that Tesla has killed the fuel cell vehicle.

Having said that, I would be interested to hear people's thoughts about using a small fuel cell as a secondary power source in a vehicle similar to the Chevy Volt or BMW i3.  As a backup power source, could it be economical?  What would be some of the advantages?