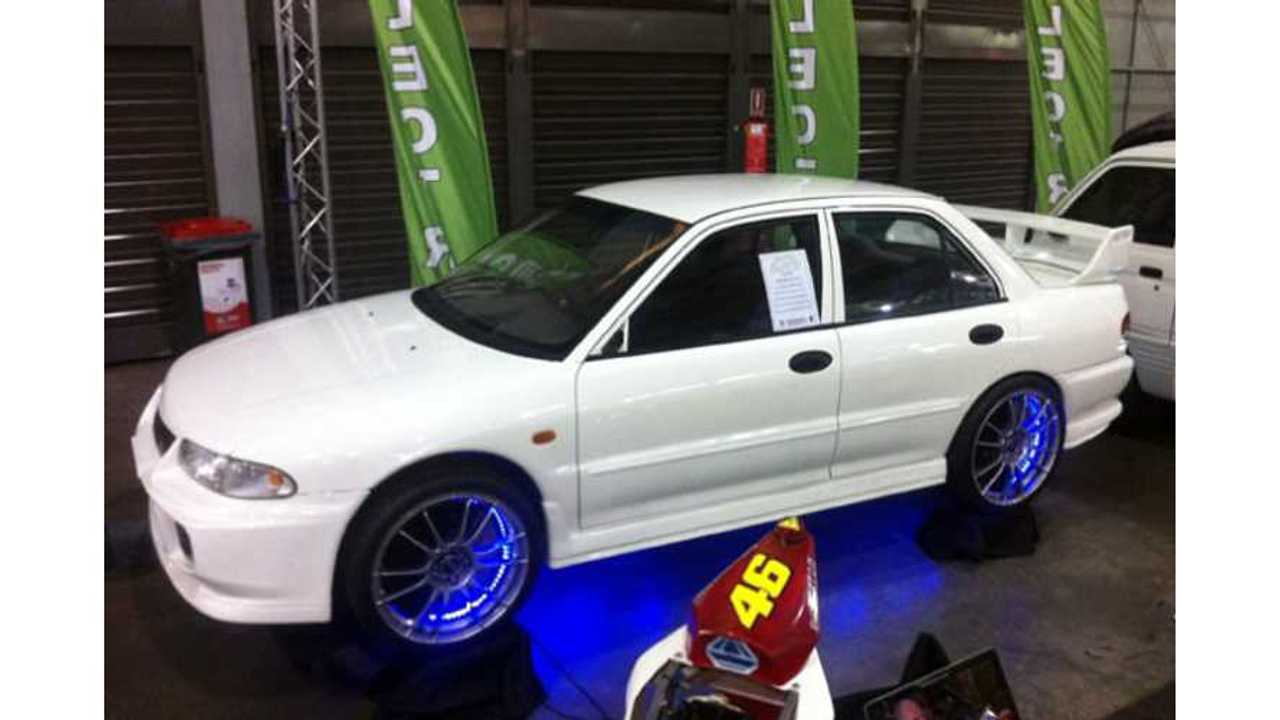 Yes, there's an * in here and we'll get to that soon, but first here's our intro to this torquey machine.

Evans Electric describes this particular Evo 3 in this way:

"The 4 door sedan with World Rally Championship pedigree features a direct drive, disc type electric motor in each of it's 19" wheels. Each Axial Flux 3 phase AC Induction wheel motor has a nominal output of 75 kw and 625 Nm of torque with a peak output of 150 kw and 1,250 Nm giving the vehicle a total peak output of 600 kw (800 hp) and 5,000 Nm.*" (note the asterisk)

"Direct drive wheel motors eliminate mechanical transmission losses allowing up to 85% of a vehicle's kinetic energy to be recoverable during braking. Maximizing brake regeneration lowers a vehicles over-all energy consumption potentially leading to more range per kWh of battery capacity or the use of a smaller battery pack for similar range. As the battery is the single most expensive component in an EV this could lead to lower cost electric cars."

Of particular interest though is this statement:

Evans Electric tells us that it holds tons of patents for all this stuff:

Okay, fine.  We don't care about patent holders so much as we do that *.  So, here's that explanation:

"*While the torque figure could at first glance appear fantastic, standard automotive industry practice only quotes torque at the flywheel not at the wheels. As an example the Tesla Model S Performance has a quoted peak motor torque of 600 Nm. With a single speed reduction gear ratio of 9.73:1 that equates to a total of 5,838 Nm (minus gearing losses) at the wheels. The Evans Electric motors are direct drive, so the rotor turns at the same speed as the wheel. Instead of mechanical reduction gearing, they are electrically geared using an 8 pole stator winding configuration."

Using those calculations, the Tesla Model S Performance would boast 4,306 pound-feet of torque!!!