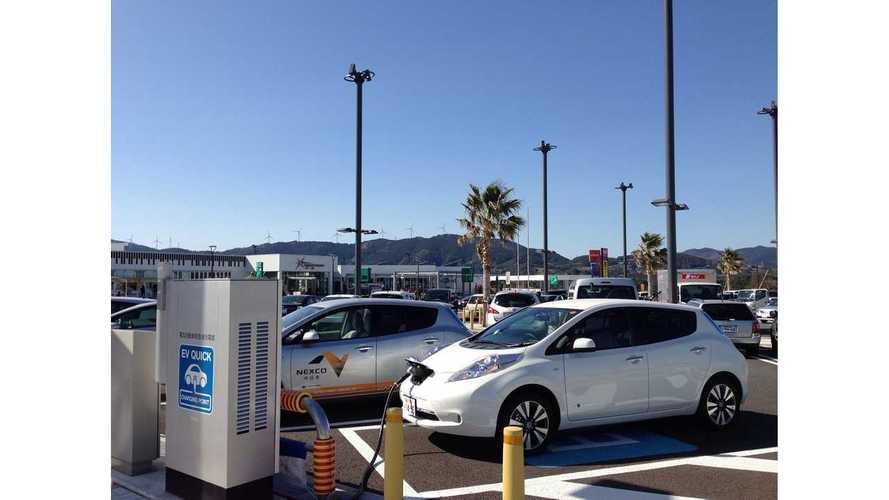 Four automakers,  Toyota, Nissan, Honda and Mitsubishi Motors, announced a new agreement to work together to promote charging infrastructure development and to build a charging network service that offers more convenience to drivers in Japan.

Currently, Japan has over 3,000 "normal chargers", which means slow AC points and 1,700 CHAdeMO fast chargers, but this is "generally recognized to be insufficient."

So, the plan is to build many times more charging points using subsidies provided by the Japanese government totaling one billion dollars.

With that kind of money, Japan soon should be flooded with fast chargers. From previous posts, we know that long term goal is to have 36,000 CHAdeMO spots.

Not So Sure I Need CHAdeMO

"The government announced subsidies for installation of charging facilities totaling 100.5 billion yen as part of its economic policy for fiscal year 2013 to quickly develop the charging infrastructure and expand the use of electric-powered vehicles using alternative energy sources. Currently, each prefecture in Japan is drawing up a vision for the use of the subsidies. With this strong support, the four automakers will work together to install the chargers. Previously, each automaker assessed possible locations for charging facilities on their own. Now, they have agreed to work jointly under the common understanding that the charging infrastructure has public value and that enhancing it should be done quickly during the limited period that the subsidies are available."

Noteworthy is that Honda in Japan is testing the Fit EV with CHAdeMO.

I Get CHAdeMO in Japan

The main points of cooperation are:

Under the agreement, the four companies will launch a joint project to work on the following actions:

1. Promote installation of chargers in Japan

Studies are underway to increase the number of normal chargers by 8,000 and quick chargers by 4,000. Normal chargers could be installed in commercial facilities (e.g. large shopping malls, do-it-yourself stores and family restaurants), which are destination charging spots or en-route charging spots with longer duration stops (e.g. highway service areas and roadside stations) when a vehicle could be charged. Quick chargers are to be installed at en-route charging spots for shorter-durations stops (e.g. highway parking areas, convenience stores and gas stations).

3. Build a charging infrastructure network which enables customers to use their PHVs, PHEVs and EVs more conveniently Collaboration among companies currently providing charging services in which each automaker has already invested (Japan Charge Network Co., Ltd., Charging Network Development, llc and Toyota Media Service) would lead to the creation of a more convenient charging infrastructure network. One example is enabling the car’s owner to charge his or her car at any charging spot with the same card.

Electric-powered vehicles are the driving force of alternative energy initiatives. The government aims to expand the use of the next-generation of these vehicles and have PHVs, PHEVs and EVs achieve a ratio of 15 to 20 percent of new car sales in 2020. The four automakers are committed to developing a charging infrastructure for a more user-friendly infrastructure and to contribute to creating a society where electric-powered vehicle use can maximized.

Japan's governmental goal of having 15-20% of the vehicles on it roads being plug-ins by 2020 also makes an impression on us.