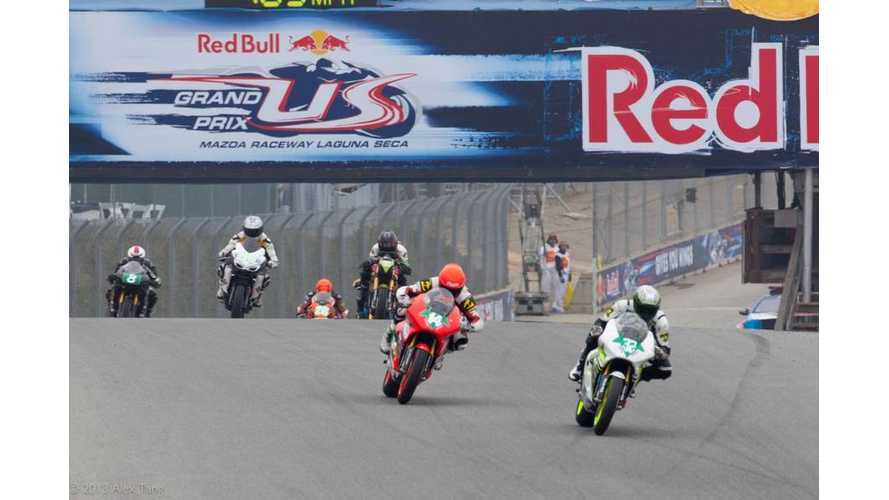 Bostrom Leads US Series After Record-Breaking Turpin Fails To Finish

Last weekend, the FIM eRoadRacing series appeared in California, where the first US round was held at Mazda Raceway Laguna Seca alongside MotoGP.

Sadly, a total of only eight racers attended - four on Brammo and four on Zero Motorcycles bikes. Moreover, no Mission Motorcycles, Motoczysz or Lightning appeared at the race.

In previous years, there were more participants both from the US and Europe and this brings up some concerns about the future because the Laguna Seca round is typically one of the strongest of the season.

But let's get back to race. Shane Turpin, on Brammo Empulse RR, was the fastest the whole weekend, wining qualification with 1’32.516, relatively close to the 1’31.194 record from 2011 set by Steve Rapp on Mission R.

Eric Bostrom managed to a 1’33.087 on the same bike and all the other rides on Zero S and Brammo Empulse TTX bikes fought for the next places. Interestingly, Zero S bikes seemed faster than Empulse TTX (modified Empulse R) and Kenyon Kluge and Ted Rich took third and fourth about 2-3 second quicker than the best time set by a TTX - Shelina Moreda.

During the race, Shane Turpin led the way, but unfortunately technical problems eliminated him on the final lap and the win went to Eric Bostrom.

After the race Bostrom stated:

"My heart sank when I saw Shane had a problem. It’s a strange feeling because you obviously want the team to do well but you still want to win too. It is a real shame to win that way but I am still happy to have won."

"You can see from the lap times that we are going in the right direction and the technology around these bikes is continuing to develop. We were producing speeds of over 140mph on the track, which is just fantastic."

Sadly, the race ended quickly for  Shelina Moreda, who on the first lap at the Corkscrew crashed and took out Ted Rich, too.

"Our goal for today was to go and do what we did in qualifying yesterday and be consistent. We set up the power so we would have almost identical lap times at the end of the race as we did at the beginning.

"I knew that a couple of people had fallen but I wasn’t sure if Shelina had fallen or not. She was one of the people I figured I would be racing with. I expected her to be there so I just raced like I had somebody chasing me and it worked."

"We just managed the race. I didn’t ride the bike as fast as I could have because it was about making it last until the end."

"I was hoping to come fourth and actually at the end of the race I thought I was fourth but they told me to turn around and go to the podium, so it was a big surprise for me!

"I am looking forward to Indianapolis now. It is a fun track and being able to say you are one of the few Americans that have raced a motorbike at Indianapolis is huge."