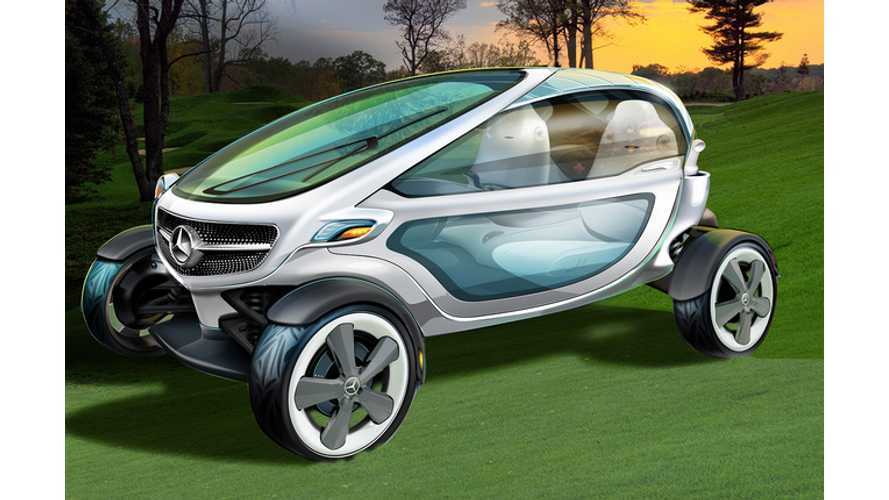 Meet the golf cart of the future.

The Mercedes-Benz Vision Golf Cart has been conceived as a "prototype that previews the golf cart of the future."

Mercedes-Benz released the first sketches of the Vision Golf Cart, an electric greens runner that was influenced by the submissions of hundreds of golf and automobile fans.

M-B took these submissions and turned them into the vehicle you see here.

Gorden Wagener, vice-president of design at Daimler AG, had this to say of the electric cart:

"The Mercedes-Benz Vision Golf Cart has a refined, simplified yet functional shape that fits well into our ‘Sensual-Purity’ design philosophy. The flow shapes create a ‘sculpture on wheels’ impression,  I was very inspired by the idea of designing a golf cart, giving it a new shape and new sorts of meaning. Why not treating a golf cart like a car."

The Vision Golf Cart gets its go juice from a battery pack mounted under the floor.  That pack sends power to four  in-wheel electric motors.   A solar panel keeps the battery charged during its time on the course and a plug fills it up overnight.

Mercedes-Benz didn't release specs on the Vision Golf Cart, but some of the press material gave us a chuckle, so we'll share a bit of that here:

"The Mercedes-Benz Vision Golf Cart is electric driven, powered by a battery that is kept continuously charged by a solar module integrated into the roof. Manual charging, as for a conventional golf cart, is also possible. The vehicle is controlled in innovative and intuitive fashion via a joystick mounted on the centre console, so making it possible for either passenger to drive the golf cart."

"The centre console also incorporates a multimedia panel that includes a rotatable docking station for an iPad or iPhone and a USB interface. Various functions that are available in the golf cart can be controlled from here, for example vehicle functions such as loudspeakers or the air-conditioning system, the head-up display, the music system or communication with the clubhouse and other golf carts."

"If so required the head-up display integrated into the windscreen can also be used, when the golf cart is stationary, to show the course layout, the current status of the game or weather information. The digital speedometer is placed beneath the windscreen. One wish that came up time and time again, irrespective of country or language, was the possibility of being able to use a telephone. The cart thus also features Bluetooth, so allowing telephone calls to be made via the loudspeaker system while on the move."

"An important issue is connectivity. Due to the iPad/iPhone connection to the cart it is possible to communicate directly with the golf club, for example to order drinks or food for the halfway catering. Current weather data and rain radars are available at any time. Working people have the possibility to write e-mails. In addition, users can share the digital score card or even photos from the golf game directly on social media channels"

"The so-called "fore button" can be used to quickly warn other players of a misplaced shot. Pressing this button sends a warning to all other golf carts within the danger zone so that they, too, can issue a warning signal."

Let's "fore" warn all the golfers out there that this dream machine is purely a concept.  M-B has no intention of producing it.