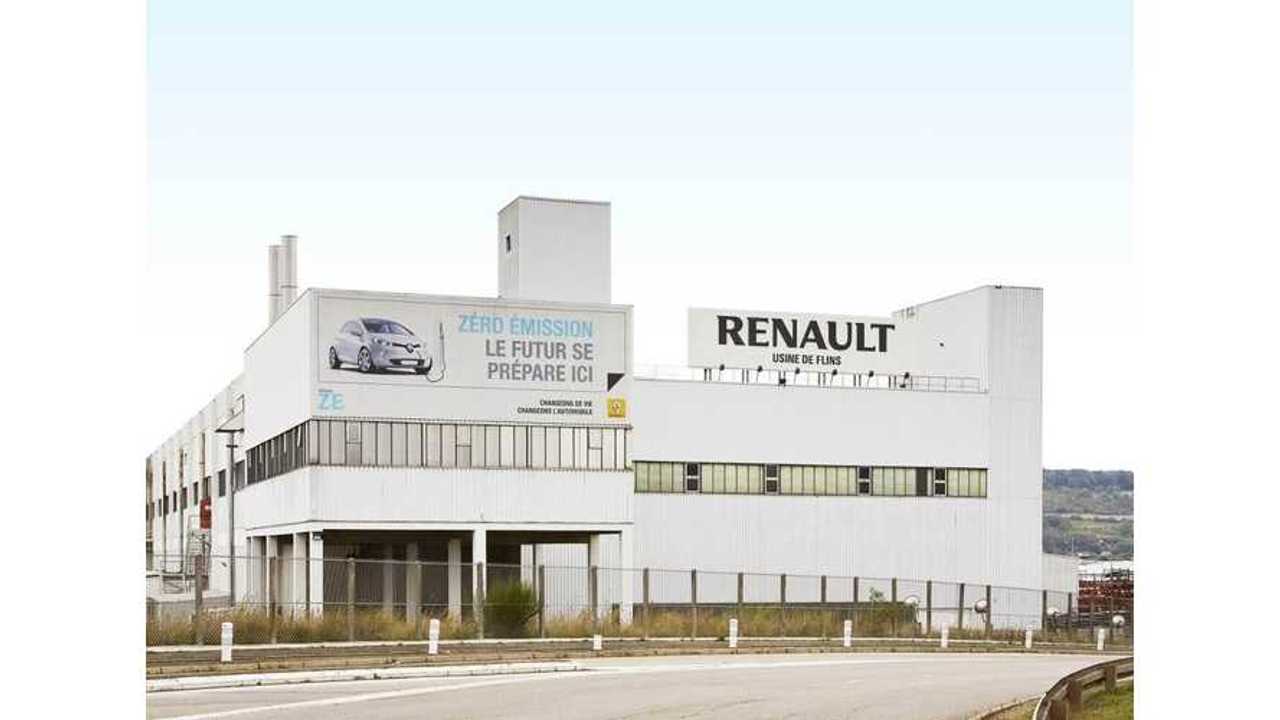 Recently, Renault presented a story on Zoe production in Flins, France.  That's where the flagship of Renault’s electric vehicle range is assembled, together with the New Clio and Clio Collection on the same assembly line.

Production of the Zoe in Europe started at the end of 2012 and, by March 2013, production was up to "full speed" (but not quite full capacity). For now, the full-electric hatchback is being manufactured for sales in 11 countries.

French manufacturer Renault is saying that Zoe's arrival at the Flins factory did not call for that many changes to the means of production.  Quoting Didier Lehingue, Deputy Director of the plant:

"The arrival of an electric vehicle could have introduced a lot of changes, but we have managed to keep them to a strict minimum."

Preparations for series production of Zoe in Flins took about two years.

For more on Zoe and how it's produced in Flins, check out the press release and additional images below.

Production of ZOE, the flagship of Renault’s electric vehicle range, started at the end of 2012 on the same production lines as New Clio and Clio Collection. The industrial development of ZOE was a tough challenge for Flins, but the plant succeeded in launching the series production of two very different and strategically important vehicles for the company, ZOE and New Clio, at the same site and in the same year. The people at Renault showed outstanding ingenuity to minimize changes to production resources and cope with the specific demands of electric ZOE in the manufacturing process in a totally fluid manner. The production processes of the ZOE and New Clio body shells are so similar that it takes a carefully trained eye to spot the differences between the two.

The launch of Renault ZOE heralds the start of a new era, in which zero-emission mobility will become broadly affordable. ZOE was designed exclusively for electric propulsion and is crammed with the most advanced electric technology. But its arrival in the plant did not call for that many changes to the means of production. “The arrival of an electric vehicle could have introduced a lot of changes, but we have managed to keep them to a strict minimum,” explains Didier Lehingue, Deputy Director of the plant. That was the goal of the 20-person team tasked with the industrial development of ZOE, headed by David Garreau, when it set to work in June 2009. The team had two years to launch the series production of ZOE on a single line at Flins, while meeting the Brand’s usual standards of quality.

In the first stage, lasting almost one year, the team organized the industrial development process. David Garreau qualifies this phase as “fundamental to defining the basis and finding the optimal industrial organization”. The goal was to find smart solutions, from the design phase through to the production methods, for adapting existing systems and keeping initial outlay under control. For example, the perfectly operational old-generation Acma or ABB robots have been reused. This is called carry-over. After hours of meetings, forecasts and calculations, cost estimates and the development of the end-to-end process, the decisions were finally taken on the technologies and the layout.

The arrival of ZOE also prompted some larger-scale adaptations. The most radical changes were made in the stamping shop, which produces the opening panels (doors and tailgates). The means of production had to become sufficiently flexible to make opening panels for four different models – ZOE, New Clio, Clio Collection and New Clio RS – instead of just two previously, Clio III and Clio III RS. The white bodies of the RS versions are then shipped to Dieppe, where they are painted and assembled.

Major works to reorganize and refurbish the workshop were organized in the summer breaks in 2011 and 2012, during which the equivalent of one half of a soccer pitch was totally demolished and cleared. The tools were cut at the base by enormous cutting machines and scrapped, and the concrete floors were broken up and rebuilt. The brand new workshop boasts 550 robots, including 150 additional systems for greater flexibility and for performing ZOE-specific welding operations. To score a 5-star rating in EuroNCAP crash tests, ZOE’s chassis was reinforced to protect the battery installed under the floor. On the assembly lines, this means that 500 extra welds are made on ZOE compared with a conventional vehicle.

An extra step has been added at the end of the assembly line, in which the battery is installed in ZOE’s underbody. The production line can switch between Clio Collection and New Clio without making any changes. The three models are manufactured on the same line in a totally fluid manner.

Renault is breaking new ground by assembling the batteries directly at the production plant, in a 500 m² workshop set up from scratch and kept safely under wraps for eighteen months. Another tough challenge for the site consisted in setting up an assembly line using manufacturing processes close to those found on lines producing mechanical subsystems, with operators working on fixed workstations, in a car plant where the operators work on the vehicles as they move along the assembly line. After lengthy discussions, a decision was finally reached on the battery assembly process. The operators will work on the batteries at a standstill in order to guarantee build quality, but for a limited time only, in order to keep pace with the production flow of the vehicles. If they have not finished when their time is up, they can press a button to withhold the battery. Otherwise, the battery moves on to the next workstation.

The battery assembly shop was designed to meet stringent quality and safety criteria. The workshop is organized more like a white room than a conventional industrial workshop. The project team opted for highly automated processes, in particular for all the operations on the batteries charged to 400V, in order to protect the safety of the operators. A full 34% of the operations are performed by robots, compared with 10% in a mechanical assembly workshop.

Every employee in the battery assembly workshop is specially qualified to work in this unusual environment. The workshop is split into two quite separate safety zones: the 60V zone and the 400V zone. Electrical risks are limited by performing most of the manual operations in the 60V zone.

The battery is powered up at the last minute at the end of the line by two specially trained operators. The design office included an opening in the battery housing that is used to connect the modules to one another at the very end of the process.

The plant makes the two-component assembly seals itself, in order to guarantee the assembly quality of the battery cover. The 5-meter long seal is installed by a robot around the perimeter of the cover and passes between the bolts. A robot scans the position of the bolts and sends the exact path to a second robot, which installs the seal, in order to achieve precision of a millimetric order. The sealing and the electric functions of all the batteries are then tested, and in particular the charge and discharge cycles. The batteries are then stored, ready to be mounted in ZOE.

The first ZOE rolls off the assembly line

The very first ZOE rolled off the plant’s assembly line in September 2012. It was an important and emotional moment that rewarded all the hard work done by the plant's personnel. All the plant’s employees were invited to witness the event. Everyone was holding their breath when ZOE arrived at the end of the line, after its 6-hour journey, and entered the 25-meter long light tunnel, where the final inspections are made. The time had come to start the motor. Yvan Nordez, who managed the assembly aspects of the ZOE series production project, received this honor. He sat at the wheel, pressed the starter button and, in complete silence, the lights came on and the car set off, to the applause of employees gathered at the end of the line.

This event marked the end of the project team’s work and the start of series production for the plant’s 2,800 employees. By March 2013, production was up to full speed, and the full-electric hatchback is now being manufactured for the 11 countries where it will be on offer.