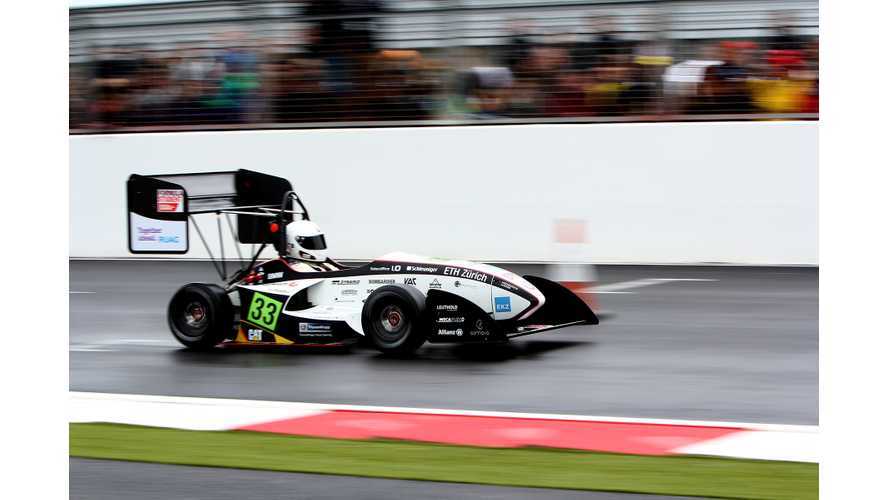 In what's believed to be a historic first in any accredited motorsport competition, an electric vehicle topped the podium by beating out a field full of combustion-engined competition.

The ETH Zurich team piloted an electric vehicle to overall victory in the Institution of Mechanical Engineers’ Formula Student 2013 event, marking the first-ever win for an EV in Formula Student competition and, quite possibly, the first victory for a pure electric in a sanctioned race event that includes combustion-engined vehicles.

"The electrically powered cars have made huge progress going from being unable to complete the 22 Km endurance event to winning overall in just five years. We are delighted by this progress but we will have to see what needs to be done in the future to ensure petrol cars remain competitive."

"The standard of vehicles on display, and the ingenuity of the students who create them, never fails to amaze me. This year’s competition showcased exactly why these men and women are among the world’s best young engineers, and all who took part should feel very proud of what they achieved."

ETH Zurich didn't win by a slim margin either.  With 921.3 total points, ETH Zurich blew away its nearest competitor, UAS Zwickau, who managed only 851.5 points.

Formula Student 2013 was held at the Silverstone Circuit in the UK from July 4 through July 7.

What's Formula Student?  Here's it being described by the body that sanctions the event:

"Formula Student is the world’s largest student motorsport event. Run by the Institution of Mechanical Engineers, it challenges student engineers to design, build and race a single seat racing car in one year. The cars are then judged on their speed, acceleration, handling and endurance in a series of time-trial races, while the teams are tested on their design, costing and business presentation skills."