US Military to Double its Spending on Alt Fuel Vehicles by 2020; Plug-In Purchases to Strongly Contribute to Overall Growth 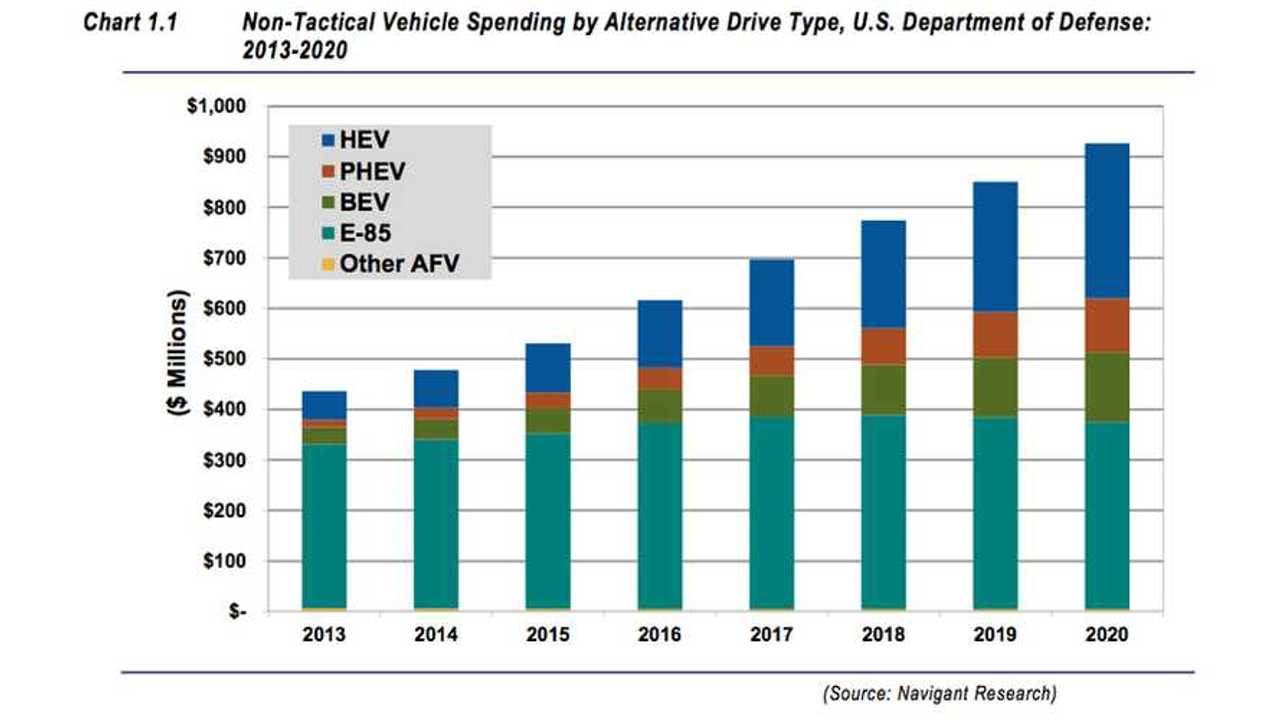 Okay, so the focus is not solely on plug-in vehicles, but as the chart depicts above (and the following graphs will below), the US military is expected to slowly but surely add a significant number of plug-ins to its fleet.

Make Me a Plug In

Navigant Research forecasts that US military spending on alternative drive vehicles for its non-tactical fleet will increase from $435 million in 2013 to $926 million by 2020.

Navigant further says that the majority of that growth will come from purchases of hybrid and plug-in hybrid vehicles.

The addition of these alt-drive vehicles will reduce the US military's fuel consumption by around 2.5% annual.  The result, by 2020, will be that the miltary's non-tactical fleet will burn through 70 million gasoline gallon equivalents, compared to 81 million today.

Why does slashing fuel consumption in the military matter?  Here's why, according to Navigant:

"The US military is the largest consumer of energy and fossil fuels on the planet. According the CIA’s 2007 World Factbook, only 35 countries consume more oil than the US Department of Defense (DOD), and only three countries consume more oil per capita. This fact is concerning to the military due to the security, logistical, and economic challenges that are inherent in acquiring fossil fuels from regions typically unstable and hostile to US interests. In some instances the cost of moving fuels to forward military locations can be a multiple of the cost of the fuel itself. Renewable fuels that can be produced closer to the point of consumption can be less costly to produce and lower the cost in personnel to secure the fuel source. To capture the strategic, economic, and environmental benefits of alternative fuels, the military is investing heavily in alternative fuels development and alternative drive vehicles (ADVs)."

Then there's this from Navigant, too:

"Fossil fuel consumption varies by use in times of combat operations and peace. Non-tactical aerial, marine, and ground vehicles have predictable requirements, however during combat operations fossil fuel consumption from tactical vehicles and equipment spikes to support stationary forward operating base (FOB) operations. This spike is considerably costly as transporting and protecting petroleum-based fuels to FOBs significantly increases the cost per gallon. This increased cost is defined as the fully burdened cost of fuel (FBCF) which is the commodity price, plus the total lifecycle costs of all people and assets required to deliver fuel from point-of-sale to the end user. FBCFs vary dramatically in tactical theaters from $25 per gallon to as much as $600 per gallon depending on how far the fuel must travel to the end user. In extreme cases, the FBCF is estimated to be well over $1,000 per gallon."

So, yeah, reducing fuel consumption in the military is paramount.  Don't you think?