Volkswagen XL1 and e-Up! Compete in Silvretta E-Auto Rally in Moutains of Austria 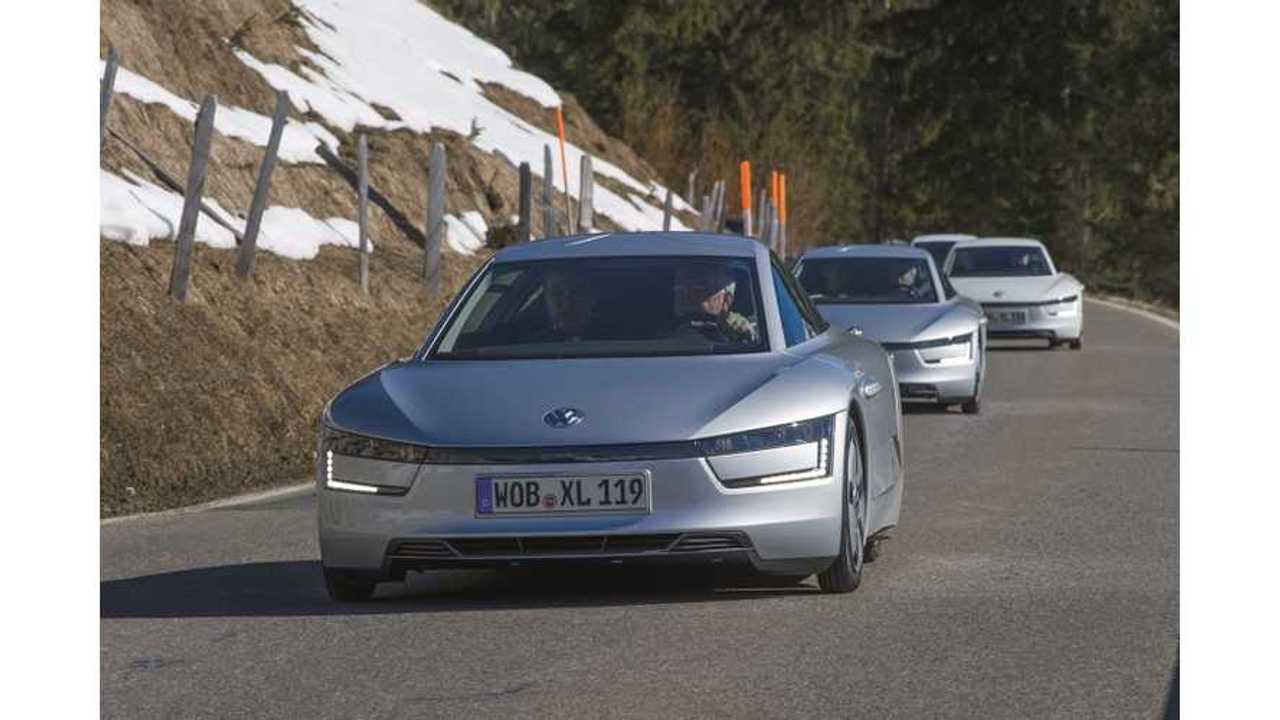 The 2013 Silvretta E-Auto Rally is currently underway and several automakers have wheeled out plug-ins to compete.

But for Volkswagen, the E-Auto Rally is more of a coming out party.  We'll get back to VW in a bit, but for now let's turn out attention to the Rally.

Here's how Mercedes-Benz (yes, M-B has a plug-in that's participating in the race, too) details the Silvretta E-Auto Rally:

"At almost 350 kilometres in length with uphill gradients of almost 17 percent and a downhill gradient exceeding 15 percent in places, the course travels through this high mountain region at over 2000 metres above sea level and, thus, requires a high level of precision. After the start in Partenen, the driver teams will be covering up to 133 kilometres per lap along winding roads."

"Every hundredth of a second counts as the drivers – equipped only with stopwatches – head to the ends of the various stages. It is not, however, the top speed that gets them onto the winner’s podium of this three-day rallye through the Montafon’s alpine landscape – skill and a consistent driving style are crucial."

That, in a nutshell, is the Silvretta E-Auto Rally.

Volkswagen has two entrants in this year's Rally.  Both the XL1 diesel plug-in hybrid and the pure electric e-Up! are competing.  We've seen the XL1 on several occasions and it's been test driven by hundreds now, but the e-Up! is more obscure.

e-Up! made its grand debut awhile back, but there's been no mention of it since then.  It will enter production and, with that in mind, VW probably figured it's time to get it out there for the world to see.

e-Up! Interior is Snazzy With Its Contrast Stitching

What does the e-Up! offer?  Let's let VW tell all:

"The E-up! can be charged with 2.3 kW plugged into any standard 230V socket, with 3.6 kW via a home-installed wall box or with up to 40 kW plugged into a DC fast-charging station via the optional CSS (combined charging system). In the latter case, the battery is 80% charged in less than 30 minutes."

It's extremely unlikely that the e-Up! will ever be sold in the US, but it seems VW is betting big that the electric Up! will be a sales success.  Why do we say that?  Well, VW will announce a slew of "purchase" options for the e-Up! this fall.  These options will include buy, lease and flexible hire packages.  It seems VW will allow for leasing of the battery pack separate of the vehicle.

The e-Up! will make a more formal appearance at this year's Frankfurt Motor Show.  That's when VW will outline complete rollout plans and announce all the details on the launch of the e-Up!